Day 9 – Rainforest for a reason

The agency from Quito, Columbus Travel, sent us a taxi to bring us to the airport. It was a short domestic airline trip to Coca. The aeroplane had seen better days, too.

As soon as we arrived we felt the humidity and the smell of dense vegetation, like being in a glasshouse. Everything was well organised and as soon as we had our bags, we were sorted into groups going to various jungle lodges and shown to our transports. We were taken to the small office of La Selva Lodge in central Coca where we learnt about the Conquistadors and the history of exploration of the area.  Then we were loaded on to the long motor boats for the journey and supplied with a beer and a lunchbag.  The trip upriver took 2 hours passing through driving rain and the crew issued thick ponchos.

Tip : don’t sit at the front of the boat. You get all the rain and spray.  The last part of the journey was a short walk from their warehouse and then canoes up the creek to the large lake itself.

We had an introductory chat before being shown to our rooms and a starting time of 1730 for the first trip in our assigned groups. Our trip turned out to be a  dusk to night canoe tour around the lake spotting various animals and creatures such as floating spiders, herons, nightingales, bats and a medium-sized boa constrictor. 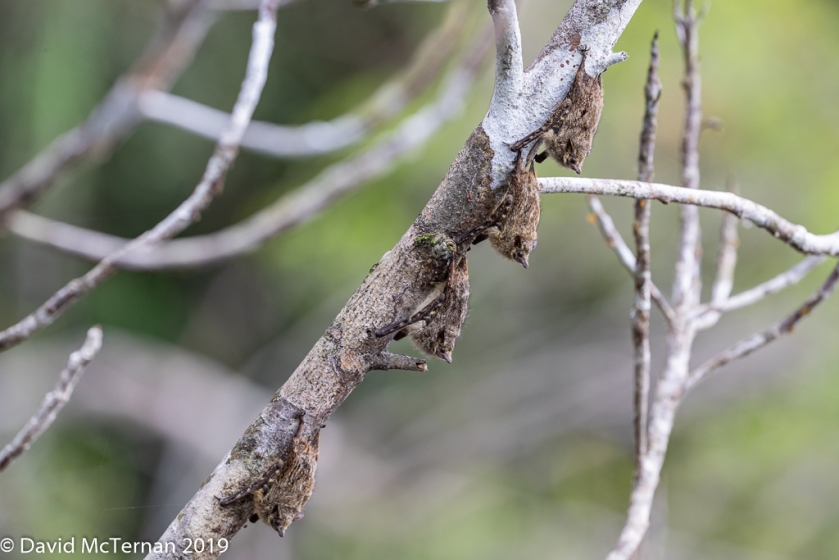 (Note to photographers – a dry box is provided and this can fit most equipment. I also bought a large water proof bag (used to protect our clothes in the suitcase upriver) and a kg of desiccating sachets which I put in to it along with all my kit – 0% humidity which might be a little aggressive)

The lodge also had the best wifi so far on holiday even though it is via satellite!

Our first early start at 0600 to go up to the lodge’s observation deck followed by a canoe and jungle walk. Mosquitos are rare around the lake due to the numerous fish and acidic water. Not so true in the jungle itself.

The observation deck gives a good view out over the lake and you can see the birds around the local trees reasonably well with binoculars (10×50) or a long lens. Even at 560mm the birds were quite small. We did what is becoming a frequent event of putting on rubber boots and canoeing around the lake looking for birds and animals. We saw a caiman at the far side of the lake a good 2m long. 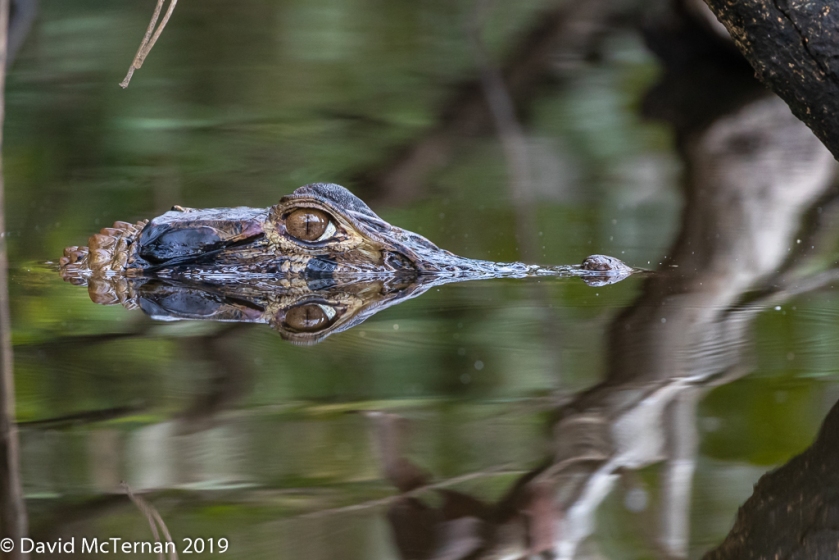 There’s meant to be a few more, up to 3m, in the swamp next to the lodge.  We did see an interesting owl like bird called a potoo perched on the top of a dead tree almost perfectly blending into the white trunk. She was on an egg waiting for it to hatch. 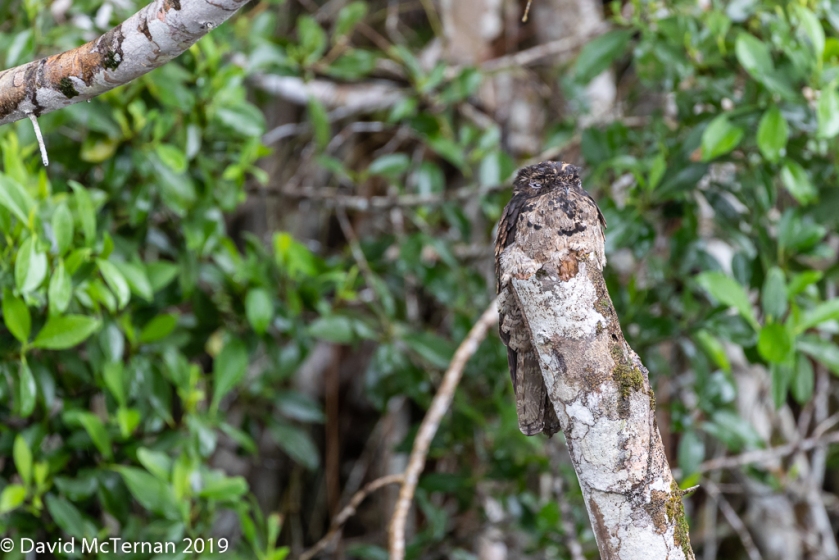 The highlight of the walk was seeing a troupe of around 30 Squirrel Monkeys travelling through the canopy. 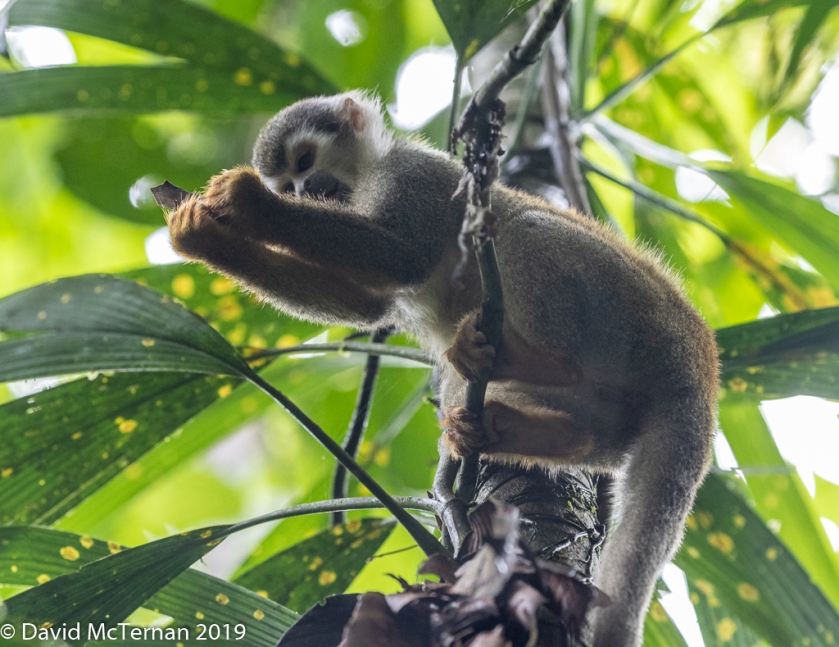 After lunch, we did piranha fishing at the dock. Una struck lucky with her first cast of prime beef on the hook.  A small piranha with a jaw full of immensely sharp teeth. You could feel them carving chunks off the meat without being caught on the hook. We’d often pull the rods out denuded of meat. One of our fellow fisher people managed to catch three of what they call sardines. 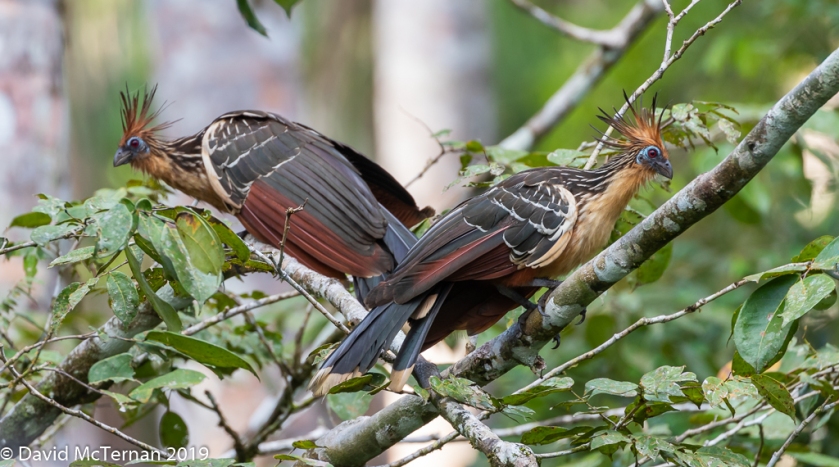 The afternoon activity was a canoe around the lake and then a night time walk back through the jungle. 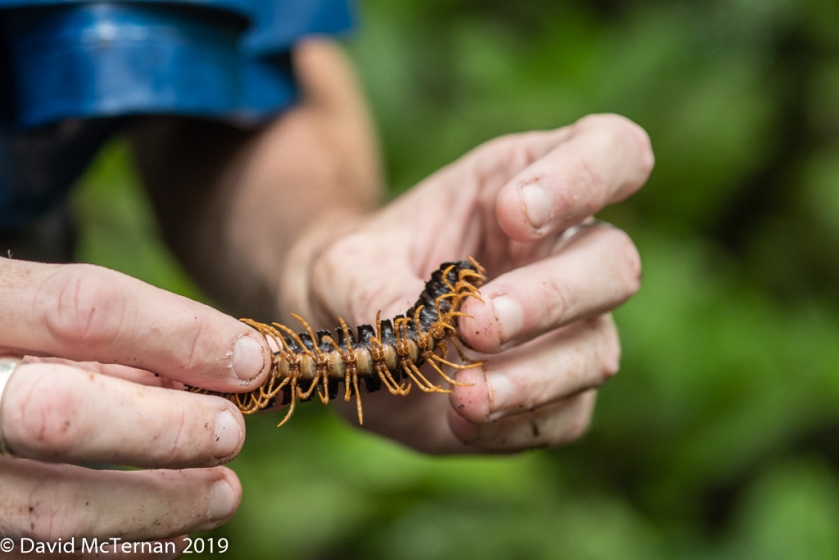 A torch is a must though we didn’t see very much. The best was probably a lizard laying on top of a broad leaf with its tail hanging down.

Up at  0515 today for an early start. We departed at 0630 for the kapok tree high observation tower which is about 20 minutes  walk away. The tower itself was changed about 3 years ago from one surrounding the tree to a metal frame going up 30m to the canopy of the kapok tree and a platform. The tree is about 300 years old and taller than most of the surrounding rainforest.

We also found a poisonous frog which the guide picked up. They aren’t harmful to humans contrary to popular belief.

We saw a number of interesting birds at a distance including one almost luminescent blue and another bright red. 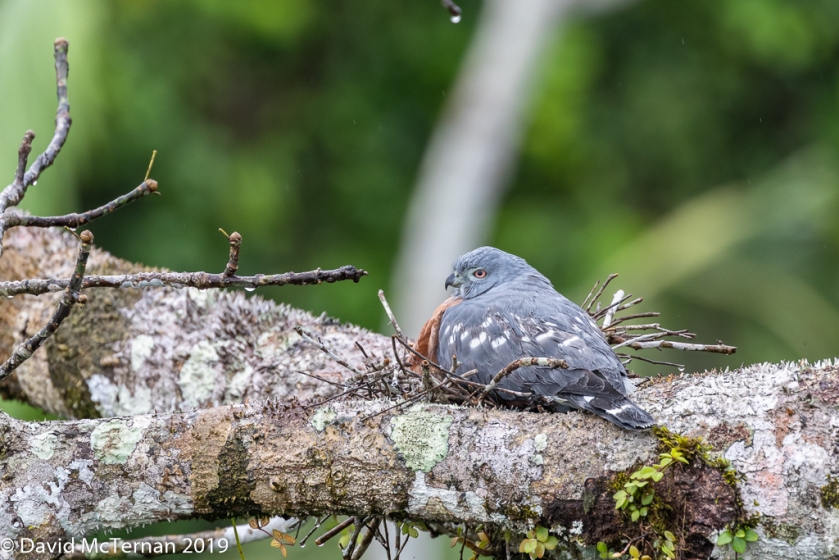 After spending about 1.5hrs there we walked through the forest to the next lake and did a tour of that. It had a lot of water lilies which are considered invasive elsewhere but here are native. Their growth is controlled by the lack of resources available. One thing the guide said that struck me was that the soil in the Amazon is very poor. Life grows so fast and furious that it consumes everything available. When something dies it is immediately taken up for something else to grow from. 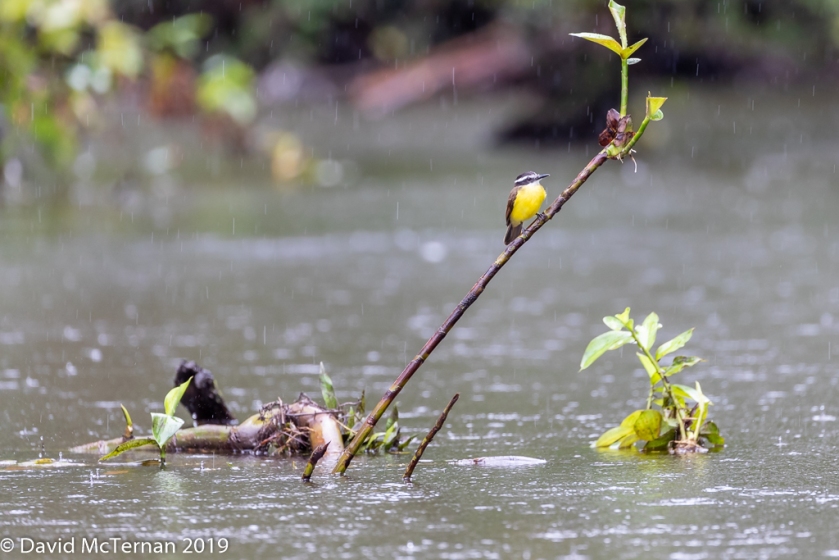 A restful 2hrs before lunch.

At 1630 we set off for a walk through the forest spotting a rare Tamarin monkey – the smallest in the world.  The mother cannot carry the two babies she produces so the male and his older sons carry them for her and return them to the mother when they need a feed. We also found a giant snail of the type they eat in the poshest restaurant in Lima. 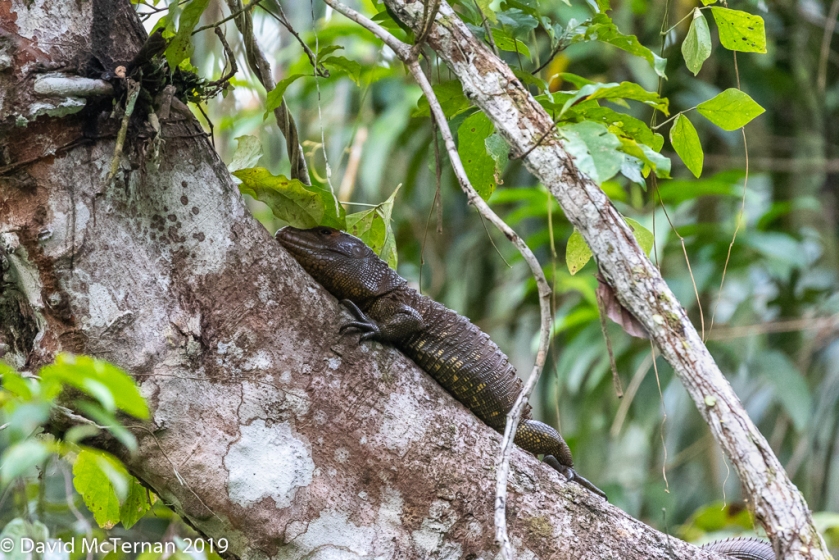 We then paddled back in the canoe as the sunset seeing bats,  a large sloth, another baby boa constrictor and the occasional huge fish surfacing like a dolphin (and in size).

Our final full day at the lodge. We decided to skip the river trip to see the parrots at the salt lick cliff  on the Napo river (we have parakeets in Watford) and the local cultural village tourist tour. Not our thing.

Instead, we stayed in bed till 0700 (luxury), had a leisurely breakfast and then kayaked around the lake by ourselves in the morning cool which meant we could linger, go where we wanted and explore as we chose. A nice change though no guide as spotter. Constant noise of howler monkeys in the distance and oropendola birds in the trees around the lodge. 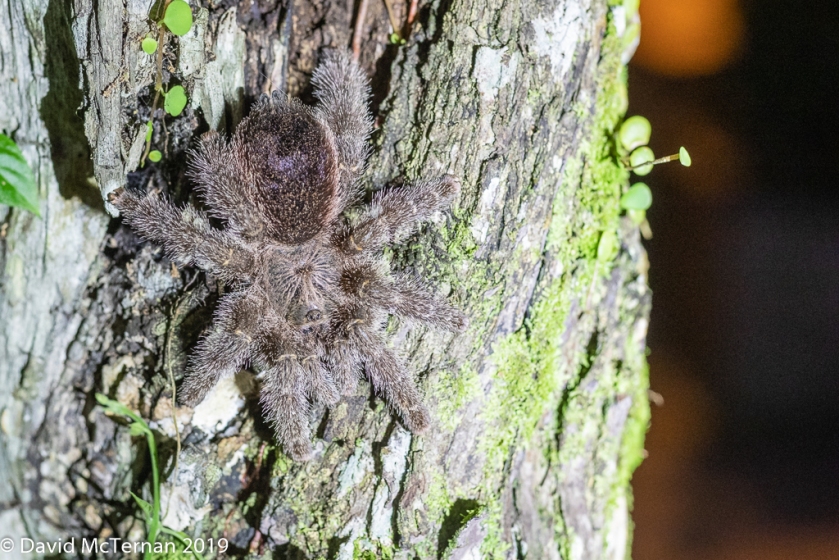 We had booked consecutive massages which were excellent for $80 for the hour. Very relaxing and removed some knots form my muscles.

Usual lunch and then packing up and sorting out pictures, reading and some bird watching from our balcony. A beautiful blue bird turned up metres away. 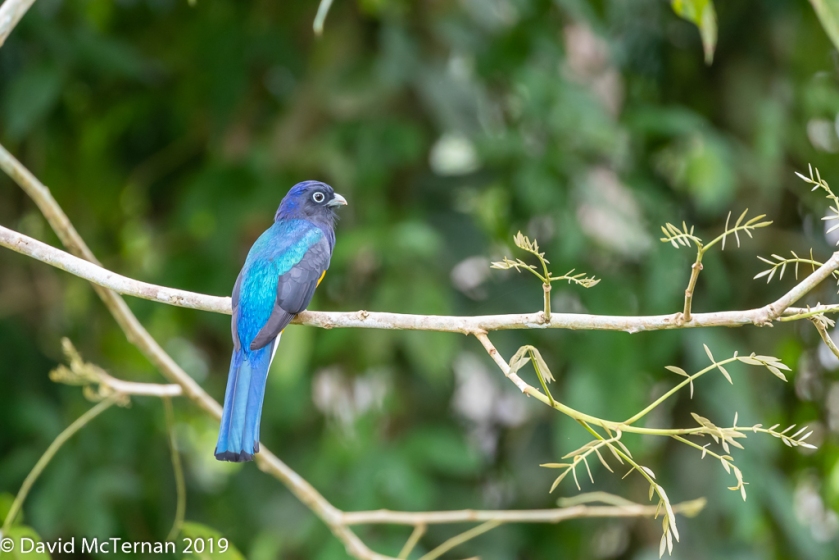 This afternoon was a short rainforest walk focusing more on the flora and uses of the trees including balsa and an ultra strong hard wood.

We had our favourite banana daiquiri cocktails along with a goodbye cocktail in reception which was accompanied by a briefing on the tipping policy. It was nice to hear from one of our American adventurers that they also felt uncomfortable being told what to tip.

We woke around 0530 and saw a very colourful albeit brief sunrise accompanied by the sound of all the wildlife including the howler monkeys. Our flight had been changed from Coca to Lagos, a border oiltown near Peru with an interesting reputation – not a good one. TAME had cancelled the original flight a week ago and the lodge had rearranged.

The flight was uneventful but was our 3rd landing at the difficult airport of Quito which needs special training.

We found a nice coffee place for a quick lunch near one of the squares near the hotel. 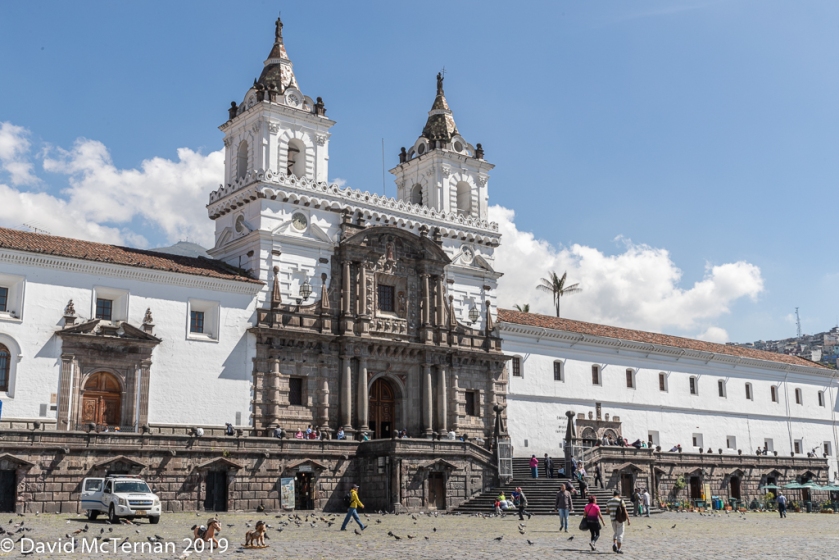 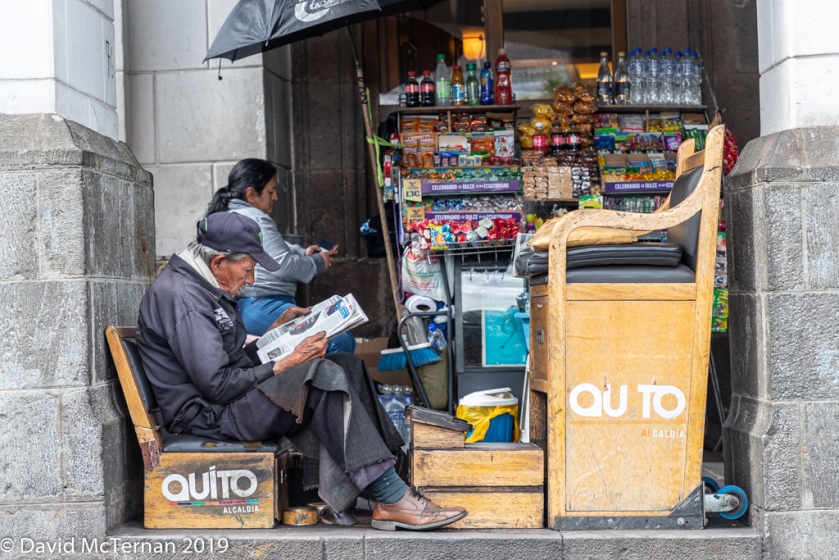 We visited various ornate  churches, cathedrals and museums in the historic centre . Some very amazing ones,  laden with gold taken from the Incas and paid for on the backs of the poor. Sadly no photos are allowed inside. We also saw the famous fresco of the Last Supper with the roasted Guinea pig. 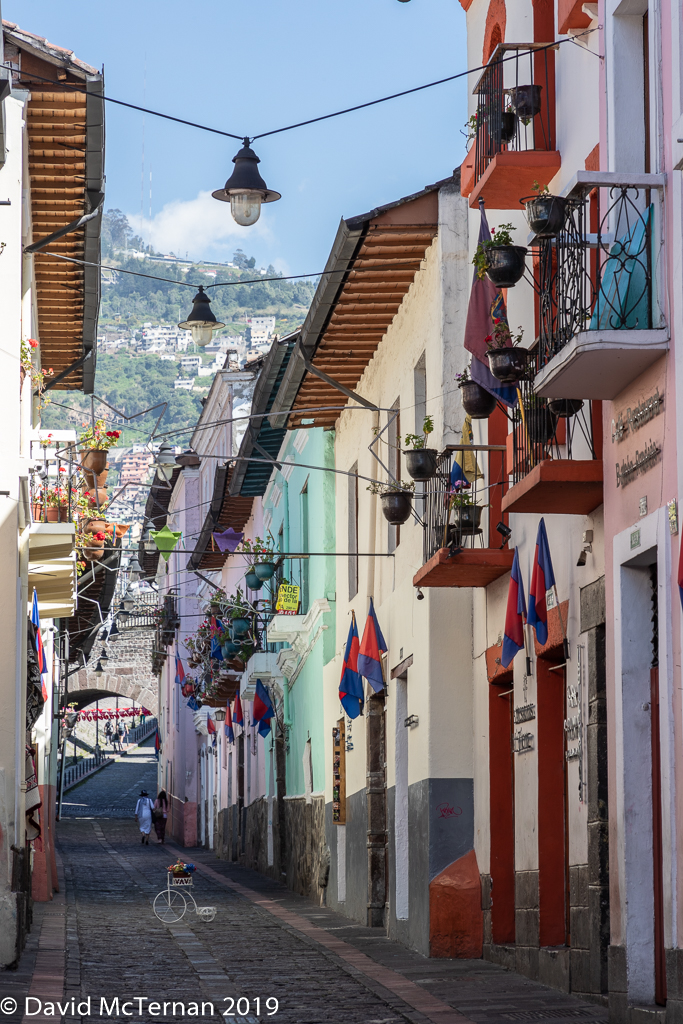 The public squares are good for people watching . 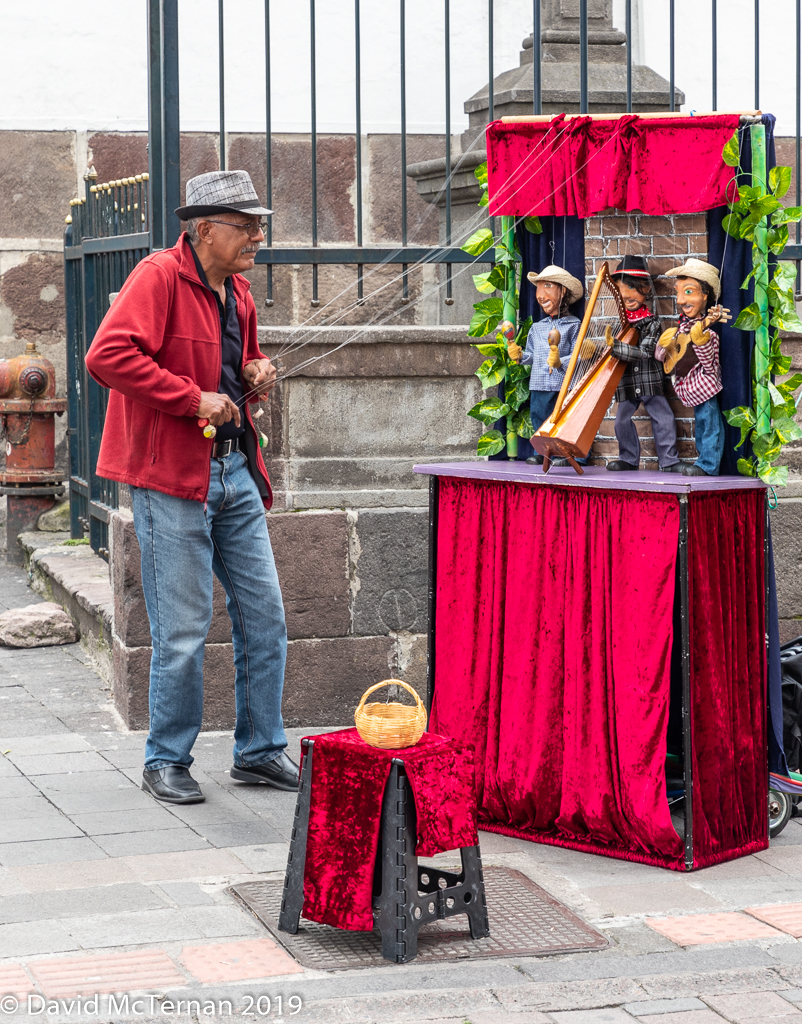 The architecture reminded us of Lisbon, that same sense of faded colonial grandeur. 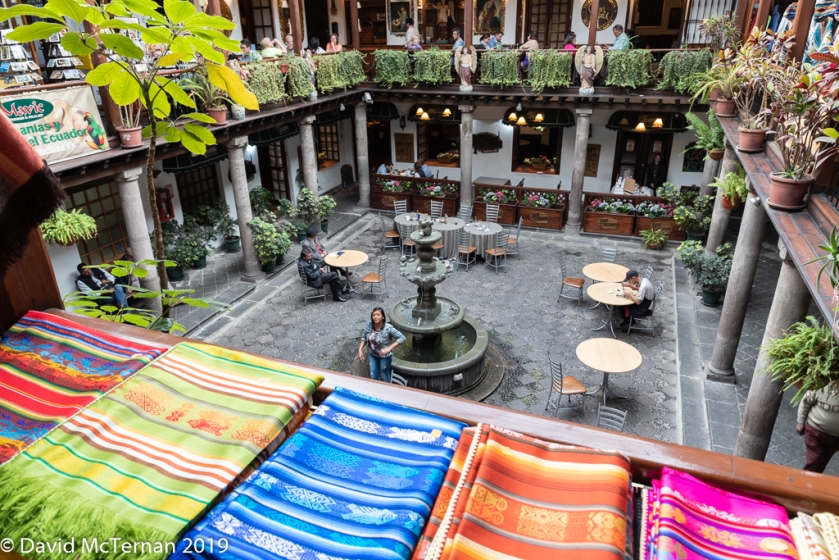 Dinner at La Purisma restaurant adjacent to an old theatre.

With a late afternoon flight, we decided to explore Quito using one of the historic walks in the Lonely Planet. 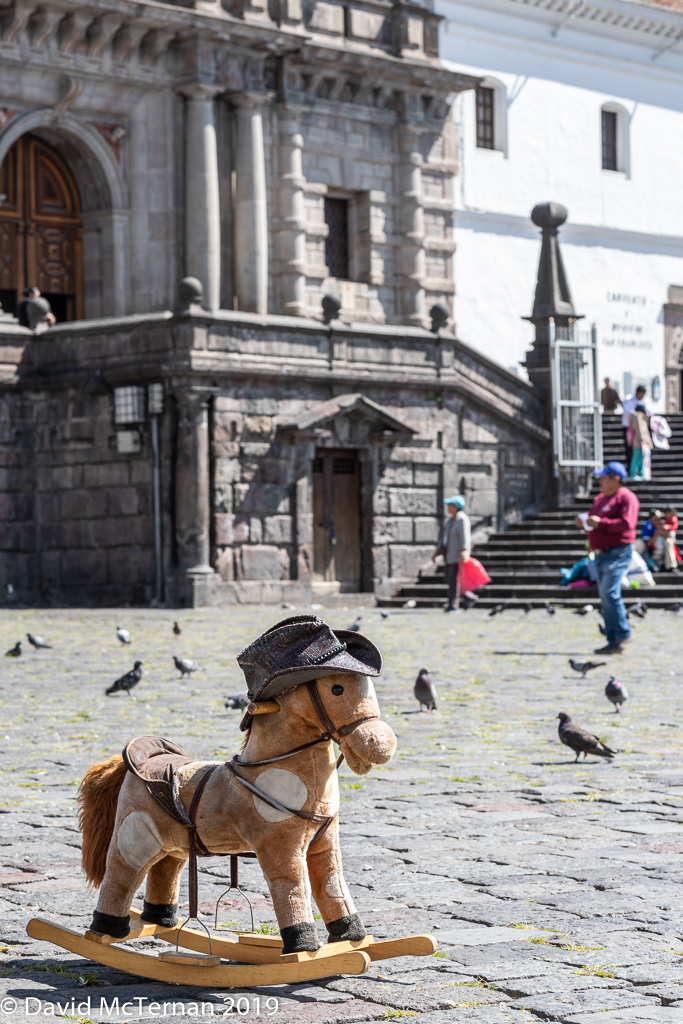 After walking around the historic area, we decided to get an uber equivalent (kindly arranged by the staff in a coffee shop), to the Virgin of Quito statue on the hill. Bit of a detour through suspect areas as roads seemed to be closed at random around Quito. We also paid him extra to wait and take us back to La Ronda.  Museo de la Ciudad was interesting for the history of Quito through the ages. 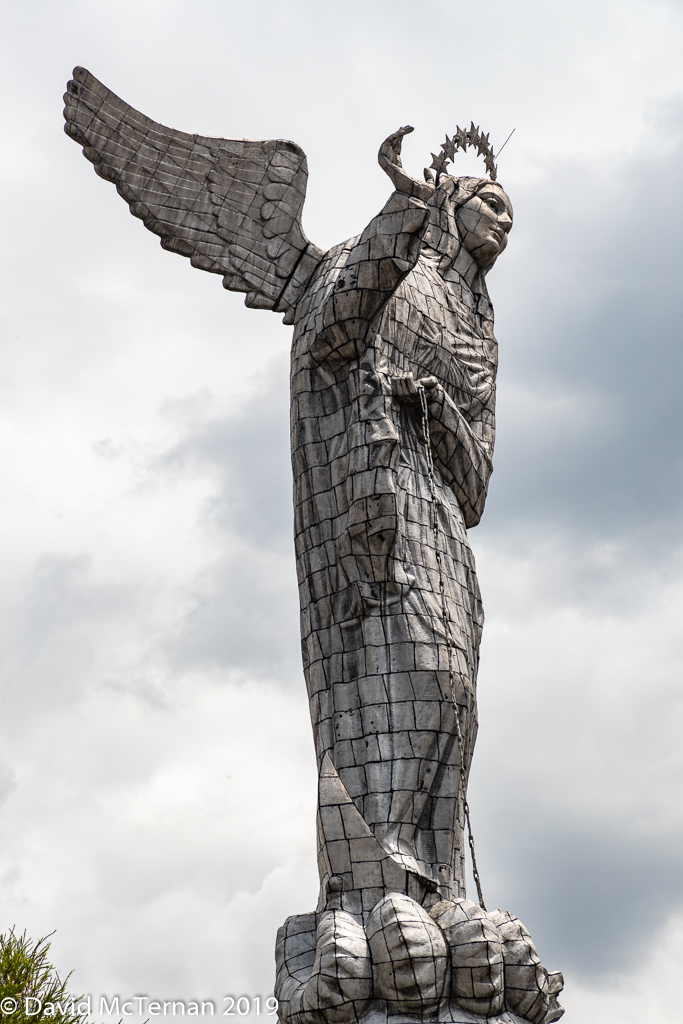 We then flew to Lima and stayed at the Holiday Inn airport hotel. Apparently it’s not safe to walk the 100m from the hotel, through the airport perimeter fence and into the building.