I don’t usually blog about our short trips to Europe but the camera hasn’t been getting much of a workout recently due to my change of job in the last year and our spring break in Jamaica was an all-inclusive rest rather than our usual mad dash around.

Munich is luckily only a short flight away and an early start meant we could get to the Alps in good time.

Using the German rail website Deutsch Bahn (DB) and App gave us the wrong impression of both train times and ticket options. The Bayern Ticket is not well advertised and is excellent value at 30 euro for 2 people . It covered our travelling from the airport right to the town of Berchtesgaden near the Austrian border. The DB ticket desk clerk helped us more than the website did and helpfully printed out times, platforms and changes.

We grabbed a  taxi for 11 euro to the Zechmeisterlehen hotel and were led into a huge junior suite overlooking the mountains and fields bathed by bright light. Stunning views. 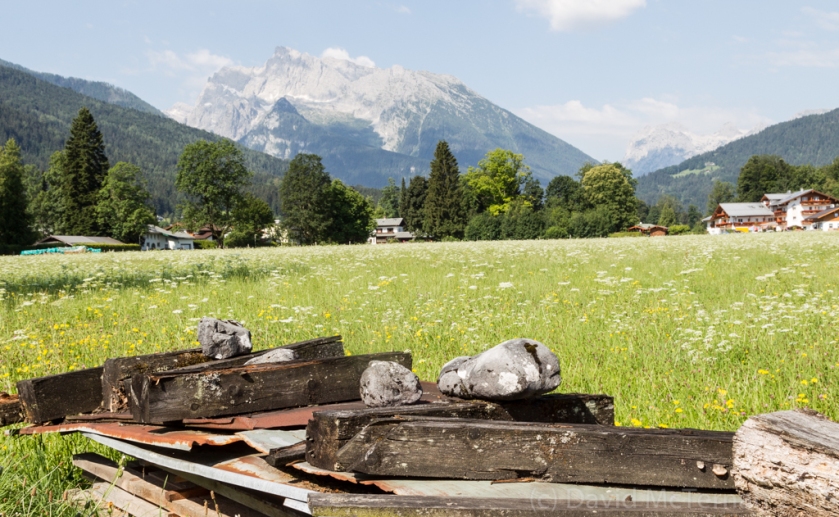 We highly recommend this hotel and our review can be found here under UnaW.

Sunday – Heading for the Hills

0830 start. Massive breakfast of a huge range of food. From yogurts to fresh local milk to cereals to eggs and bacon through cold meats.

We walked down to Königssee, the local lake which took about an hour (2.5 miles). We then picked up the Jenner cable car up to the top station and climbed to the peak.

We admired the view before hiking up the path around the back.

We got within 500 metres of the Austrian border at our first pit stop, Schnelbsteinhaus, on the gap between mountain ranges.

A lovely litre of dark beer later we started our decent to Konigsbachalm on what was meant to be path 4. The restaurant was not where the map showed and was a short descent further. It was hot and all downhill around 28 Celsius+. Simple lentil and sausage soup and more beer. It took around 6.5 hours from hotel to bottom of the cable car, so a substantial hike in the heat.

We ordered a taxi from the info centre as we didn’t fancy another 2.5 mile walk uphill to the hotel.

Great facilities to enjoy at the hotel after hiking. Swimming pools, terraces to relax in and different saunas and steam rooms for those who like that sort of thing. We mostly enjoyed sipping our drinks in the swing seats and watching the birds and the dragonflies.

Monday – Eagle’s Nest in the rain

The Kehlsteinhaus is visible from the hotel and looked like a trip for an overcast day.

However… in retrospect we would have skipped this. It is time consuming and pricey to get there and very touristy. On a cloudy day it was cold and there were no views to speak of.  We paid to see what is essentially a restaurant with very little of the historical detail we were expecting.

The nearby Documentation Centre would have been more informative but we chose to do a walk instead.

We wanted to try the summer rodelbahn of Obersalzburg so walked from the Documentation Centre (just downhill) along a wooded trail to the Hochlenzer restaurant . 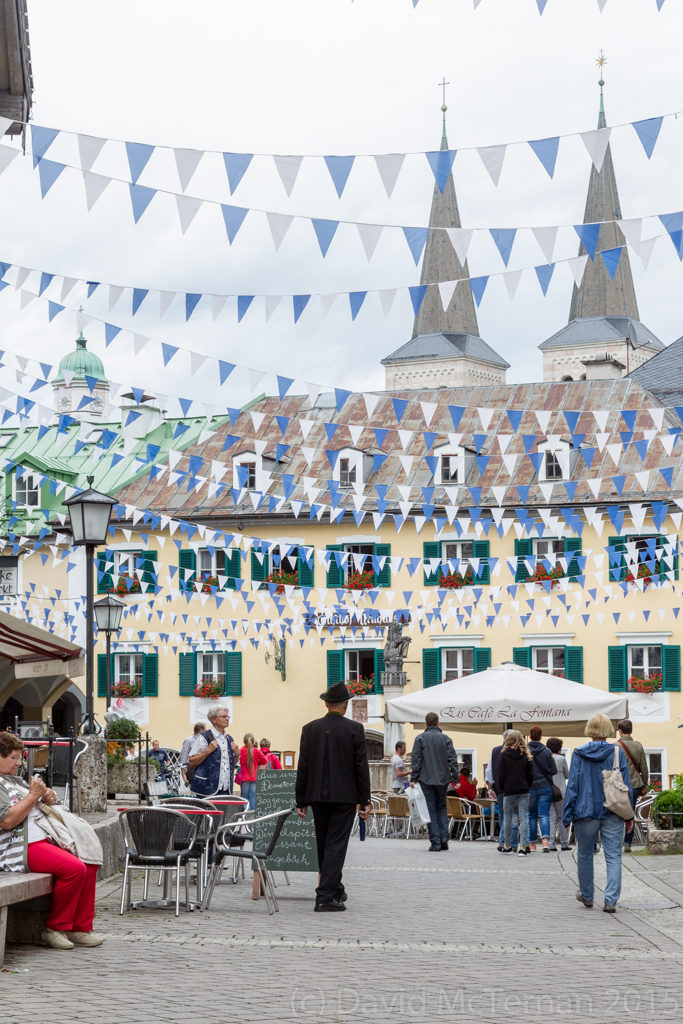 Unfortunately it is closed on Mondays and we decided to walk back down to Berchtesgaden. Luckily the unmanned Mittelstation of the Obersalzburg cable car was working (there’s a small path leading to it from the road unsigned) and we spoke to the controller via the intercom to allow us access. Nice scenic trip down all by ourselves.

We went up into the old town for coffee and strudel. A better choice on a damp day.

Tuesday – Bikes to the lake

Today we’d booked the electric bikes at our hotel. At 15 euro for the day these were good value with high-capacity Li-ion batteries. We peddled down to Königssee in good time and tried to access a path marked on Google maps (and the older topographical maps) around the lake.

The terrain become very uneven and the wet rocks from the overnight rain treacherous. The path pretty much disappeared. We backtracked and returned to town to book a trip to Salet at the top of the lake. The maps do show a path around the western side of the lake though my Garmin download from Openmaps didn’t and the guidebooks say it isn’t possible. The boat ride was serene and you get a good view of St Bartholoma Church as you approach.

We stayed on the boat to the top of the lake then had a short walk around and a light lunch. Una liked the cows with bells near the lake shore and one tried to eat her foot.

The return was uneventful and our electric bikes carried us back up to the hotel with relative ease.

We then tried as many of the spa facilities as we could – water beds, steam rooms, natural pond, indoor swimming pool, hot sauna, medium sauna etc before getting ready for dinner. The hotel has very good facilities and contrary to some reports enough English is spoken to get by and everyone is very friendly.

Wednesday – Alpine Meadows and the Kneifelspitze

Up earlier to catch the bus to Maria Gern, a well-known local chapel.  The chapel is very ornate inside and worth a quick look.

As you walk up towards Kneifelspitze there are only a few views of the chapel. Most of the pictures must have been taken along the road or from paths opposite. The walk was advertised as 1.5 hrs and “easy” by the hotel owner who probably from birth had been climbing these hills. For us mere mortals it was a constant unforgiving climb in 27 degrees. Pretty but very hot.

The restaurant at the top has lovely views if not food. Standard fair for the region – sausage soup plus beer.  It was a pleasant walk but tough on the calf muscles. Una developed a novel technique of walking backwards to save her knees.

We eventually arrived back in town near the twin towers of the church and couldn’t resist a large tub of ice cream from a cafe-cum-chocolate manufacturer after 15km of walking.

Then back to the hotel by taxi and into the spa complex, after of course passing by to sample the free afternoon cake. A restful end to a hot day on the mountains.

Our last morning spent having breakfast outside on the terrace  and watching the sun illuminate the steep tree-covered slopes. Overall an excellent stay and hotel. Our only comment was that there’s a lot of merit to hiring a car in Munich and driving down. Provides a lot more flexibility if you want to start exploring further afield and 3 buses a day doesn’t cut it.

We found the Hotel Blauer Bock hotel (review) easily enough with Google maps – on the edge of  Viktualienmarkt. 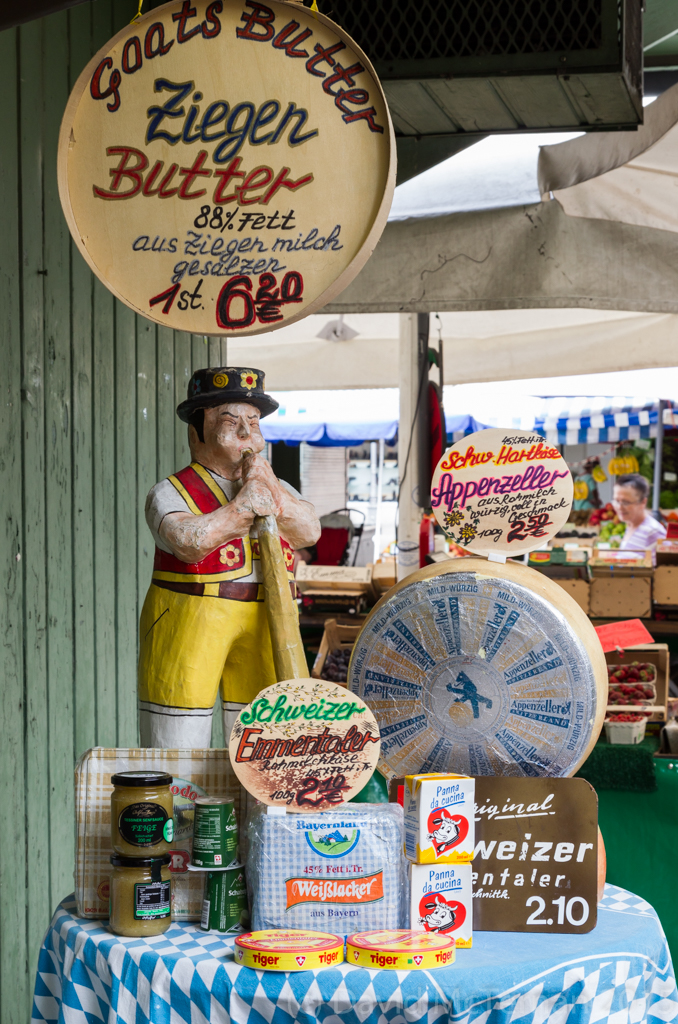 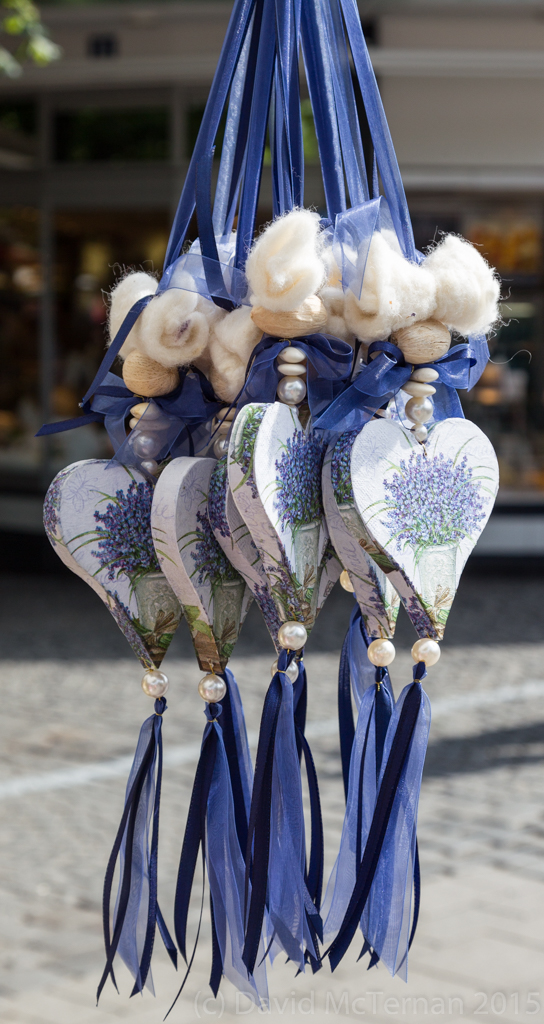 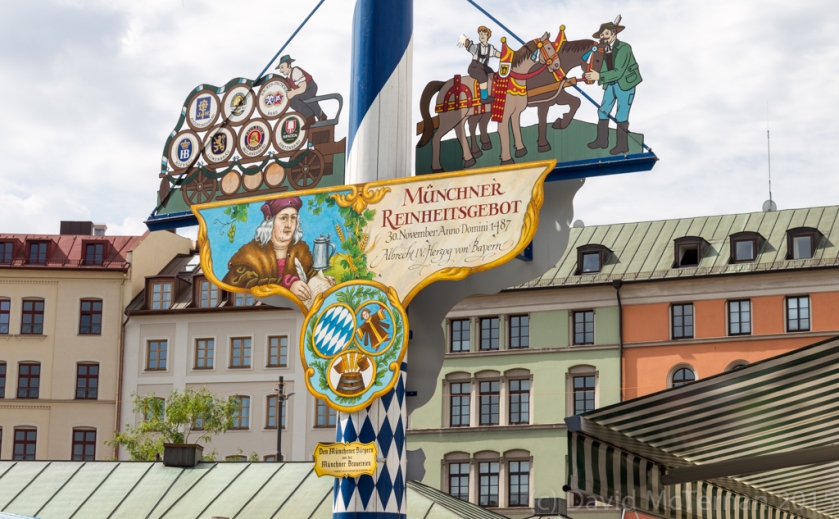 The room was compact and sadly missing air-conditioning which in the 35C+ heat was sorely missed. The hotel provided a fan which helped but the lorries outside from 4am woke us far too early. My biggest complaint was the tedious method to gain access to wi-fi. Why not just make it free without a painful set of steps to authorise use?

We explored our local area and walked down to see the surfers in the Englischer Garten  before leaving for dinner with friends who live in the suburbs south of the city.

Friday – Segway between the Sights

We do enjoy a good Segway tour. We used City Segway (review) tours run by somewhat eccentric Americans. Luckily we didn’t have to sit through a safety video as in Dresden and were quickly out to the practice area and thence off. The tour took in a number of sights with a summary of the key points of history from around 100 years before Hitler to the early 1950’s provided by our American guide who has lived in Munich 30 years. 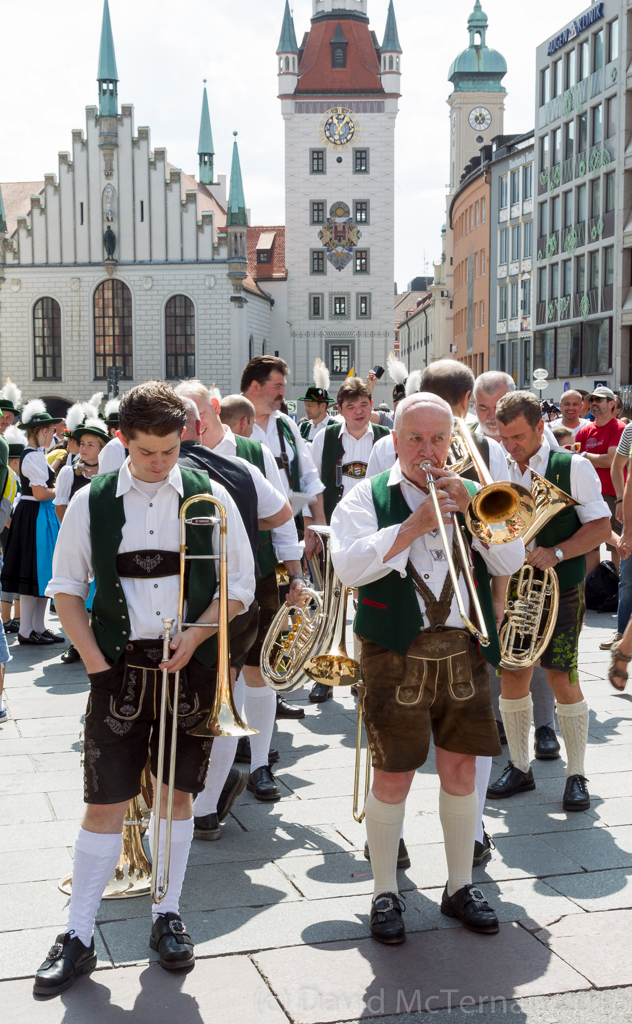 The heat was merciless but the breeze of cruising along to the amused looks of the locals was welcome. After the ride we headed up to the BMW Welt to see the museum. We have tried to book a factory tour but these are fully booked until September. Roughly 5 months ahead of when we tried initially to book.

Una had booked dinner at a restaurant called Shane’s which has an up and coming chef who goes to market each day and composes a surprise menu based on what takes his fancy. The walk down via Hans-Sachs-Strabe was much more mixed than other parts of Munich.  Ethnic restaurants and a more bohemian feel.

We sat out on the patio where it was cool though the wind did pick up later. The meal was unusual and very good. We started with some Irish soda bread and an amuse bouche of banana ice cream and couscous. The first course was eel done a number of ways with mushrooms. The flank steak was a bit tough but with interesting flavours amongst the broad beans and French beans. Dessert was peach sorbet and summer fruits.

Saturday – Hot in the City

Walked around the market and Marienplatz then off to see the  surfers.

We sat around the Englischer garten watching people glide past in the river Eisbach before off to Schwabing to look at the shops. I also had a good haircut for euro 17 rather than the euro 50 offered around the centre. We walked back through the gardens and picked up a bicycle taxi ridden by a young girl about to go off and study law. She pays euro 20 to rent the bike and then the profit is all hers.

For dinner we tried Spatenhaus an der Oper (review) and managed to get a front row seat to do some serious people watching as the sun set.

Half way through our meal we were joined by an interesting retired couple who spend their time commuting between their houses in Paris and Munich. Both philosophers, the wife having studied in Oxford in the 1970’s.

Walked up to the Neue Pinakothek to wander around in the delicious air conditioning. Wide open spaces with a small selection of art across the centuries. A nice tea garden where we topped up before heading off to the Deutsches museum. 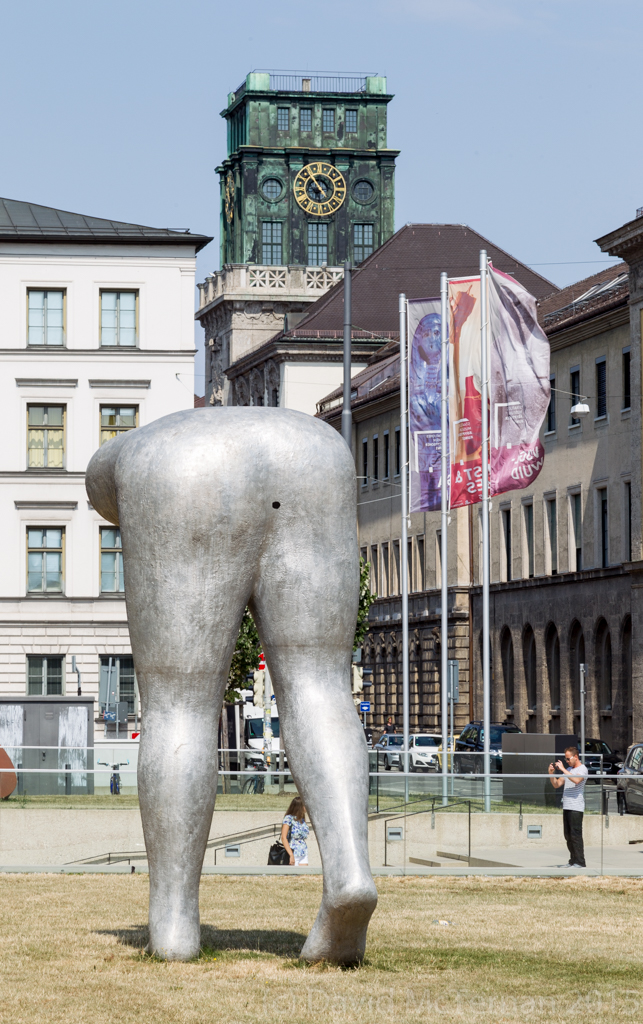 A massive building on the east of the city. This was one hot experience. For all the modernity of Munich, almost nowhere had air-conditioning. They had closed the planetarium due to the heat. The displays are comprehensive and factual as museums used to be in the 1980’s in the UK. Lots of old computer equipment and radio gear behind glass. 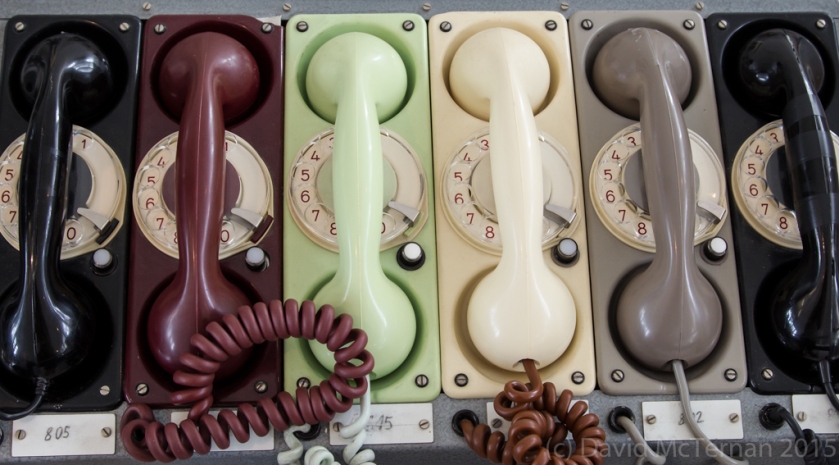 The pharma section had information on birth control and a few diseases done in a more modern way. The Germans don’t do Sunday opening. Almost everything was shut including many of the restaurants.

We ended up at Der Pschorr (review) on Pralat-Zistl-Strabe near our hotel which we had dismissed previously as just a beer house. The food was surprisingly good and one of the best, and substantial, fillet steaks I’ve had in awhile.

Back to the hotel to collect our bags and off to the airport on the efficient S-bahn. Signage at Marienplatz could be much better as line S8 doesn’t get a mention on the signs on the main level. Just follow the S signs.

Tips for the future…