The Great Wall of Ston

We flew from Gatwick to Dubrovnik on probably the busiest airport day of the year. At Dubrovnik, we were met by our driver who was also called Zoran but who was not the namesake owner of the hotel. A neighbour, he explained.

Our journey to Lumbarda on the island of Korcula was anything other than a rush. We meandered along and had a leisurely stop in the interesting town of Ston. 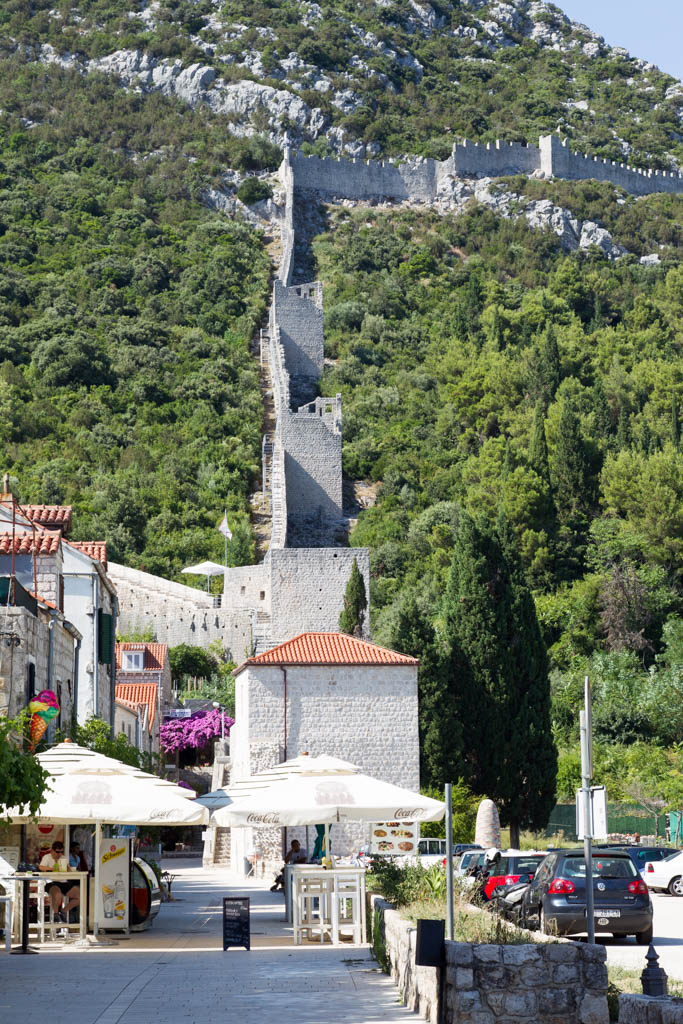 Zoran showed us around the sleepy little town with crumbling old houses and a street seller roasting lamb on the spit. We visited the old salt pans. We took a walk to the start of the famous walls which were the ancient fortress of the town, protecting the saline wealth.

We had an excellent lunch in a local seaside restaurant of some repute, Kapentonova Kuca.

Today we were hosted by the Captain’s cousin, Robert and Ivan. The latter told us he is a geography professor in term time but works for Korcula Adventures for extra cash.

We went by RIB boat to the monastery on Otok Badjia for a tour. Robert was very knowledgeable about the history though we did not see any of the famous deer. 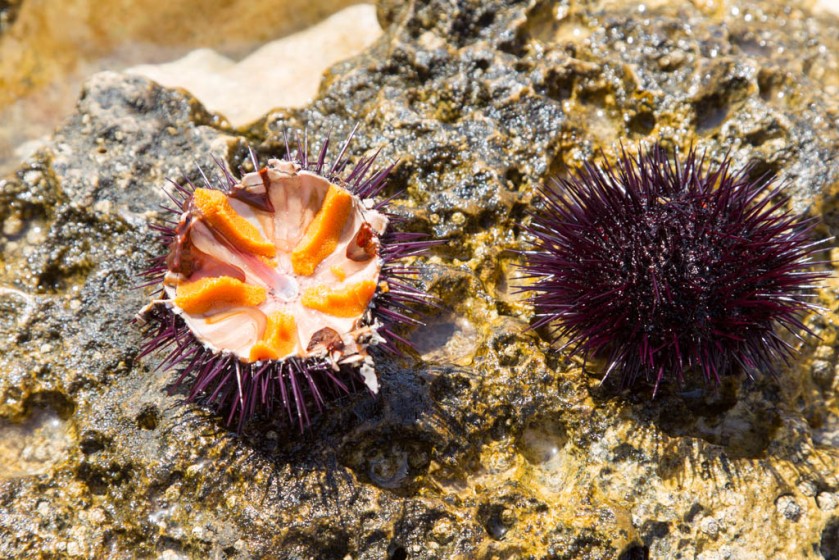 We had a stop for swimming and Robert fished for sea urchins and also caught a frisky young octopus to show us. We were offered fresh sea urchin washed down with local white wine and bread. 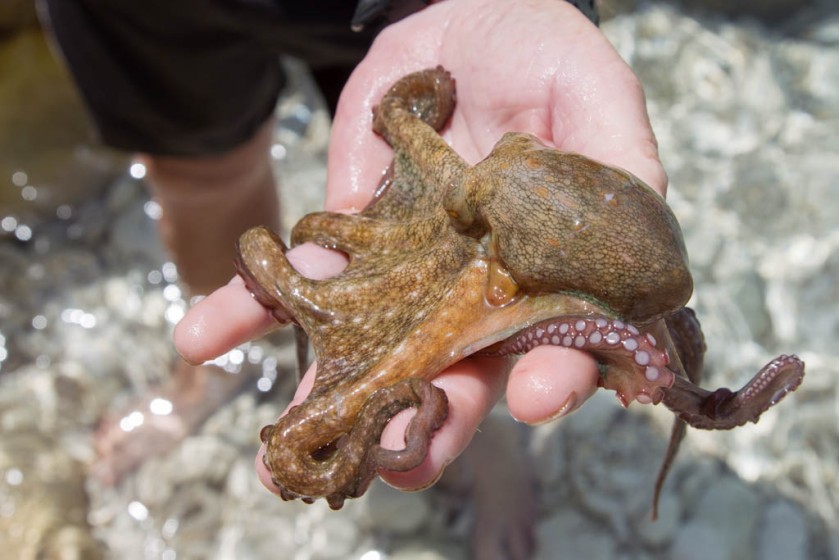 Then we went to the wreck of a container ship off Orebic before heading back 4 hours after we started.

The Time of Tito was Paradise

Some history today. We went on a road trip with another driver, Tony. Just ourselves and the Aussie couple who were our fellow hotel guests. We were driven right across the island to Vela Luka where we had a stroll around and some coffee. Then we went to the inland town of Blato.

At Blato, we went to a strange museum of ethnic history where each room was filled with Croatian memorabilia. 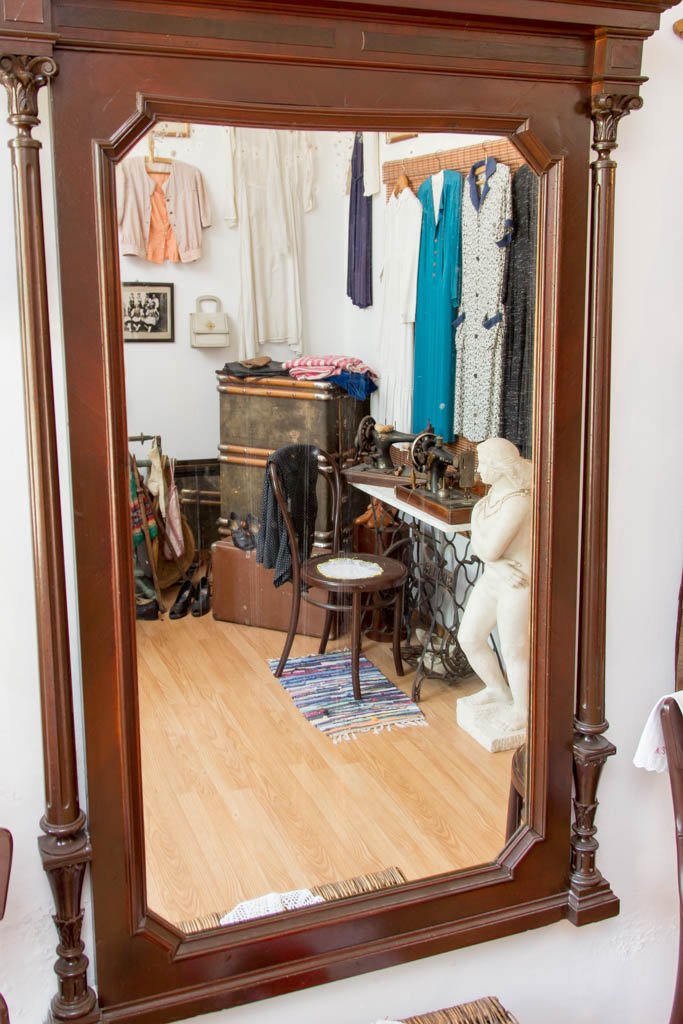 Another interesting view on what life was like and why so many left to South America in the early 1900s. Then on to Tortuga winery where we sampled various versions of Posip wine. The wine of Korcula really is extraordinarily good and made only in small local production. 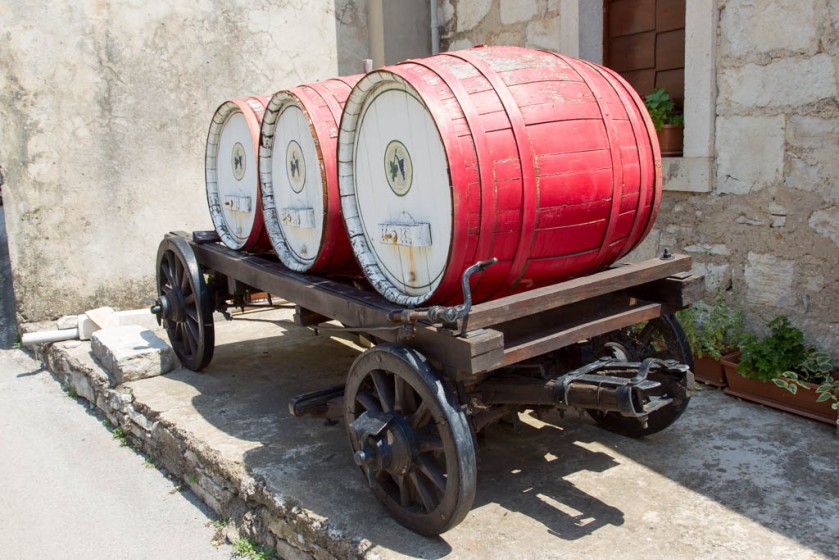 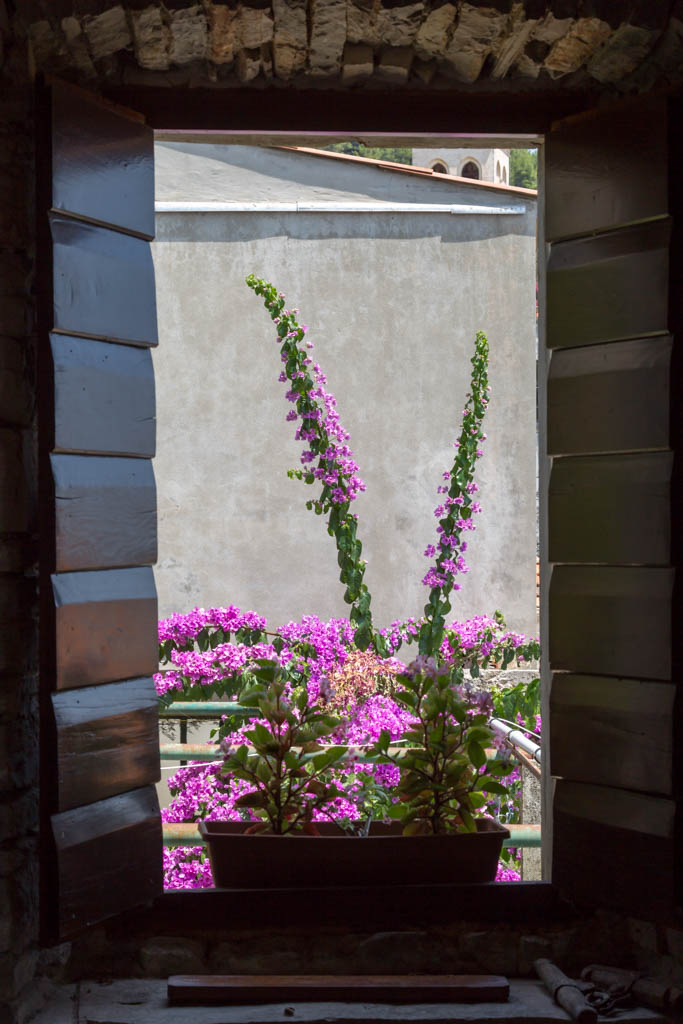 We spent the evening exploring Korcula Town and had dinner at Filippi which was OK.

The town was buzzing with tourists which was strange after the absolute peace of sleepy Lumbarda. But a pleasant change.

At Sea with Captain Zoran

Off to Mljet island with Captain Zoran on his yacht Blaza. 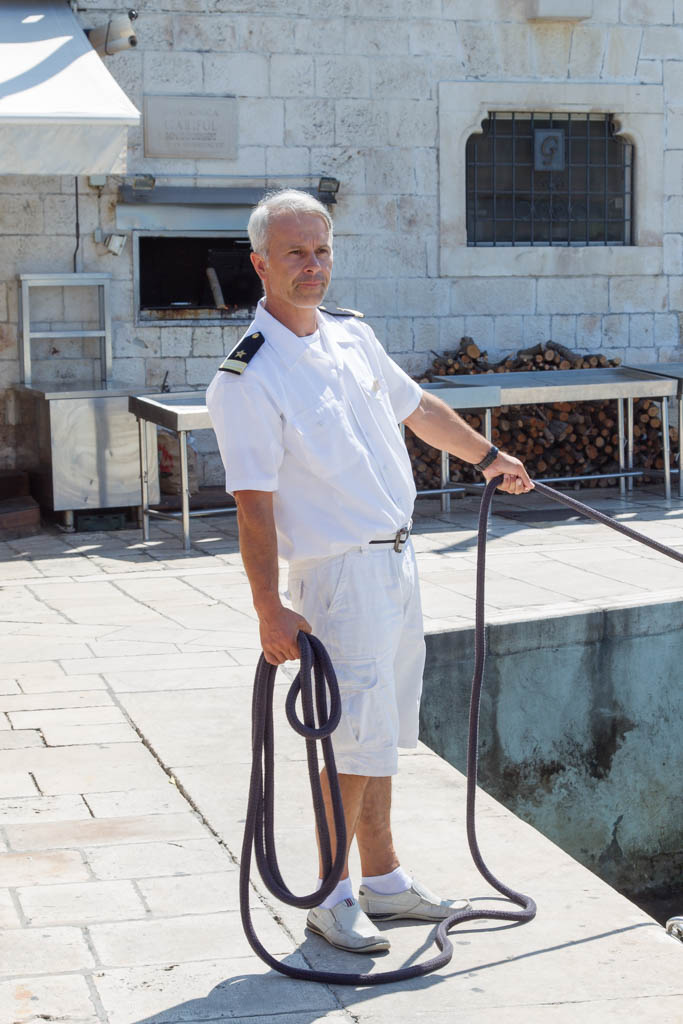 The boat is an ex- Finnish police patrol boat and is pretty fast.

At Mljet we marched off to the first lake with a bit of history thrown in by Ivan. The lakes had originally been fresh water but Tito wanted to get his boat in so they dug a channel and now it is all salt water. Just after the bridge we hopped on a ferry to the island of the Benedictine monastery Sv. Marija for a quick circular walk and then back to the ferry boat. We then had a couple of hours to kill so we swam and then walked to the lakeshore restaurant for a strong coffee.

Lunch was back on the boat in a quiet bay. We had dinner in Zure back in Lumbarda. Well worth a visit and everything including the wine, cheese and olive oil are all made on site.

Another boat adventure today to the island of Lastovo, a former military base and now a national nature park. We blasted over the rippled sea not getting soaked this time looking out for dolphins as a pod had been spotted yesterday. The tour of Lastovo with Ivan started with a short cut up a mountain path followed by a quiet road. 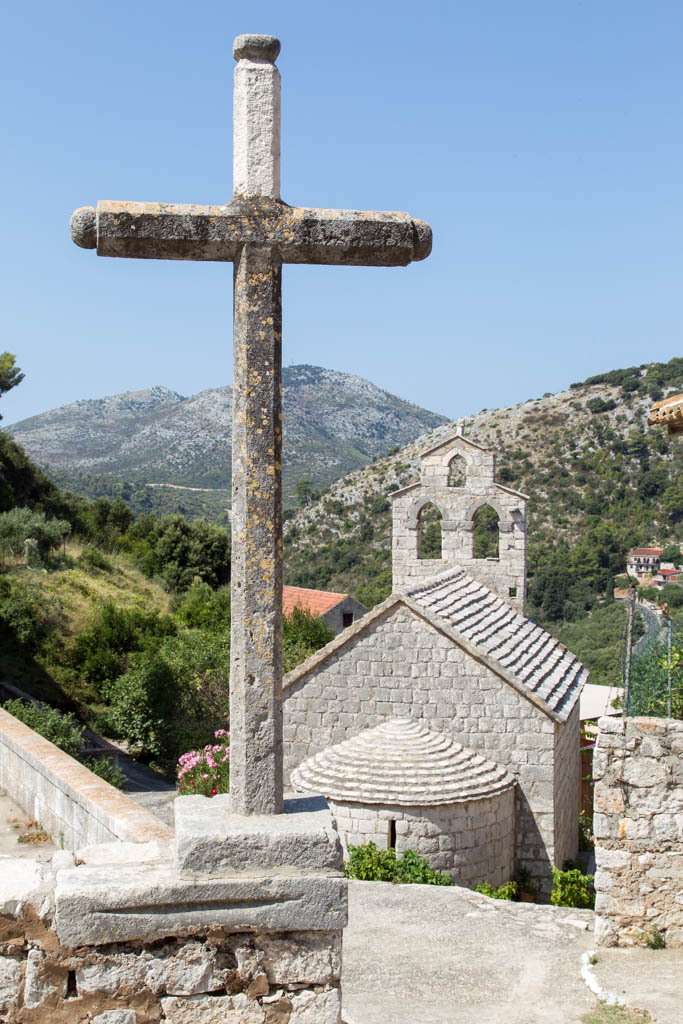 The town had interesting chimneys each individually designed to take account of the wind around that particular house.

It had the same problem which plagues many of these villages. The people have moved abroad and rarely return so some of the houses are run down or they are shared across the family with no one wanting to take responsibility for repairs.

Ivan told us about the jilted lover who had set fire to the scrub bushes and almost destroyed the island. Croatians must be very forgiving to have allowed him back after his jail sentence. 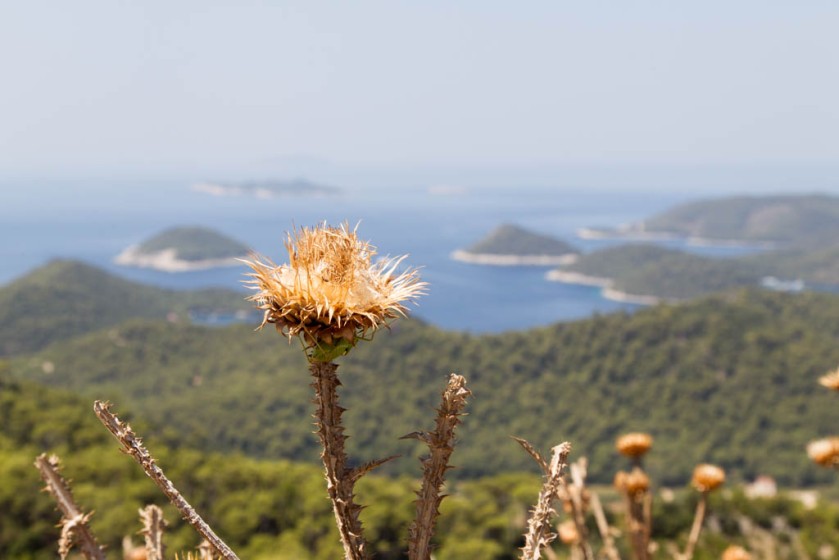 We had lunch in a bay near a disused submarine base which was a great snorkelling spot.

Our evening meal was in Konobo More, a local fish restaurant with tables picturesquely just above the water.

As an alternative for land-lubbers, Captain Zoran includes a trip combining sand buggies and wine tasting. With a beach stop in between.

This was great fun but would have been more so if we had not been in a group with rather slow-coach Chinese tourists. Still, we made the best of it and got dusty and shaken up before the wine tasting at Bire Winery. A big regret of the trip was not buying some bottles of their excellent Grk wine.

The reds were excellent too though the Chinese seemed to prefer the various fruity grappas.

We spent the evening kayaking around the local bays and enjoying the peace and the warm clear blue sea.

Dinner at Nonno in Korcula Town.

The Glitz of Hvar

Trip to Hvar to see how the old town has changed since we last visited four years ago. 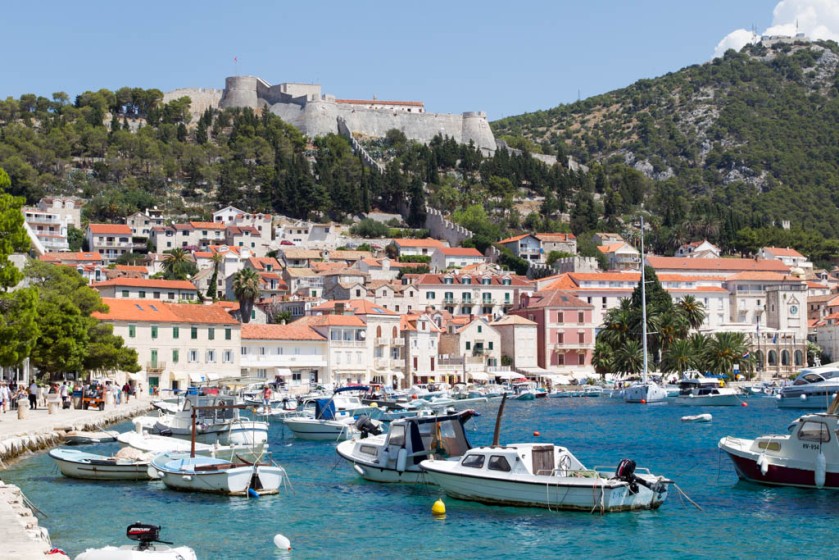 Hvar harbour itself was chock full of boats, many times what used to be here. We quickly disembarked having been given a short slot to join the thongs of people on the promenade. We had an introduction to the history from Ivan before leaving them to climb the hill to the fort. We walked along the promenade past our old haunts. Much had changed. Whilst in the past we used to walk down to a quiet pebble beach past a small beach bar, now every square inch of the rocky shore was covered by sun loungers on concrete platforms. The Hula Hula Beach Bar had at least trebled in size in four years. And so busy.

Then back on the boat to the islands opposite and our lunch and snorkel before the journey back. We passed a sporting centre for wind surfing and the sea was full of boards and sails. Zoran had to use his siren to clear the way.

We were taken out to the town of Pupnat by Zoran for a farewell dinner. It was a small family konobo Pagar with delicious fresh fish, local wine and grappa. 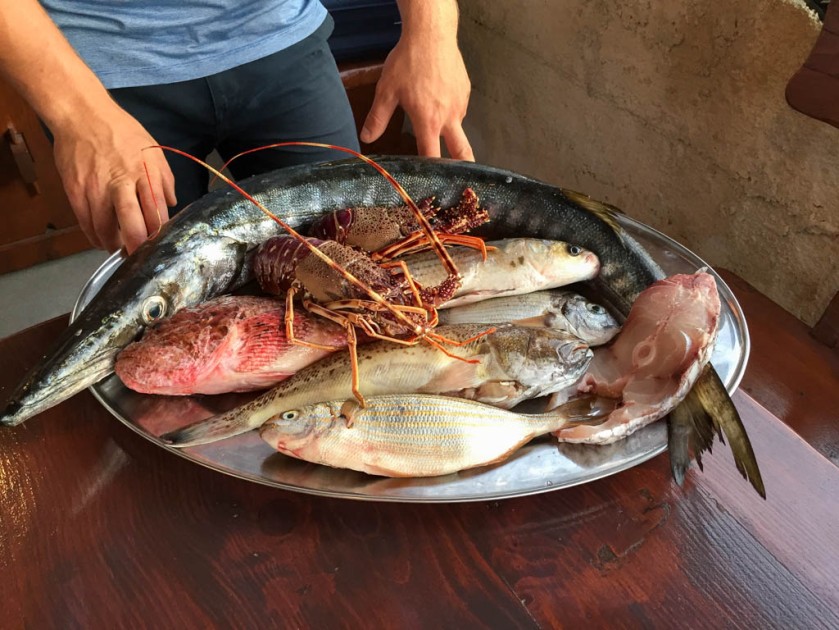 We enjoyed our stay with Zoran and Blazanka very much. Here is a link to our Trip Advisor Review. We would recommend their week-long package wholeheartedly and we would come and do it again.

We had a 3 day stay in an apartment in Dubrovnik. It was nice of Captain Zoran to take us over from Korcula by boat and we left him with his day trip passengers on the port side.

No long journey with our cases as the apartment was in the old building of the port, next to the Aquarium. By day, tourists walked the city walls a couple of feet from our windows. Thankfully it was very quiet at night.

It was a good central spot to explore the city and we enjoyed doing so. We visited the War Photography collection which was harrowing and moving. We tasted wine in the D’Vino Wine Bar much frequented by David on his previous out of season work trip.

We walked to Sv. Jakov beach for an afternoon of down time and also had a more active morning with a sea kayak tour around the city and Lokrum island. Local life continues despite the Game of Thrones and cruise ship tourists.

The final of the water polo tournament took place in the old Port just below our apartment. Cats lazed in the sun or stalked out their territories.

Some photos to illustrate. Overall, it was enough time to feel the pulse of the city by staying in the centre and just soaking it up. 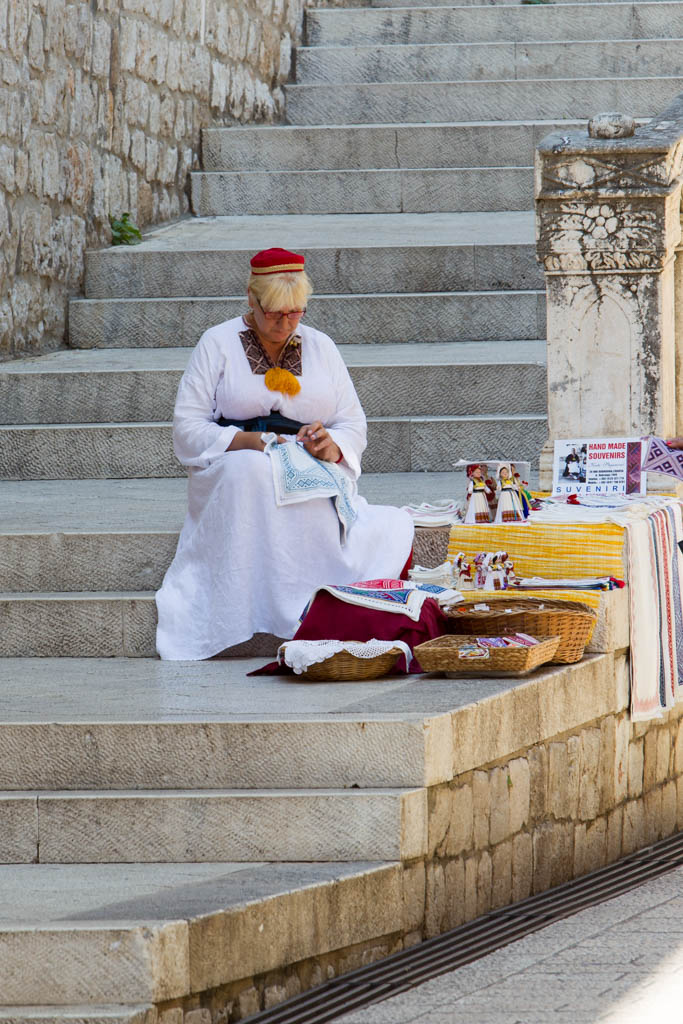 Dinner at 360, stylish and pleasant and Restaurant Dubrovnik, the one we thought the best of the bunch.

We had an excellent 10 days in Croatia and certainly feel that we would return, especially to Captain’s Villa Sokol in Korcula.