We had an anxious few days before we left home as storms had washed away sections of the N1 road and there were closures. We had to revise our route and rebook two hotels. It really helped to have checked the key websites beforehand. These were Tripadvisor Iceland Forum,  www.road.is and www.vedur.is.

An early flight from Luton and our first impression on arrival was an airport as though made by IKEA.  All routes lead out via the huge Duty Free shops where prices are much better than elsewhere for alcohol but possibly pricier for the sweets and chocs we bought. Finding our rental car was not easy as so many similarly named companies. Iceland car rental, Car Rental Iceland, Ice Rental … we needed Ice Car Rental.  We phoned them up and got taken off site to their office in a minibus. The car was a robust Rav4 but annoyingly ran out of oil one hour later. We had to buy some at a garage.

The aim was to see as much of the Golden Circle sights as possible before we collapsed, so first stop was the National Park of Thingvellir. Very beautiful in autumnal colours. All car parking and public toilets were charged for use here and this was via modern contactless credit card machines. Clearly there were interesting walks in the area but we only managed a brief look at the gorge and the tectonic plates due to lack of time. The site was extremely busy with tourist buses.

Geysir next where the tourist car park is free and is right beside the bubbling holes and the powerful Stokkur geyser. We had a quick lunch in the adjacent café/visitor’s centre. Again, the area looked full of interesting hikes and a chance to get away from the crowds if only we had the time.

On to Gullfoss. The waterfalls are pretty impressive even in the poor quality light.

Our stop for the night was the new modern Fagrabrekka Guesthouse. Just so interesting to meet Icelandic people and be welcomed into their home.

Along The Falls Road

We met the Icelandic horses on the farm after breakfast and then headed out as the sun rose towards the most famous waterfalls.

First stop was Seljalandsfoss. It can be heard before it is seen and is clearly visible from the road. As are the tourist buses. One good tip is to bring waterproof trousers, shoes and jackets as to see it properly means going behind it and it is a wet though fun experience. 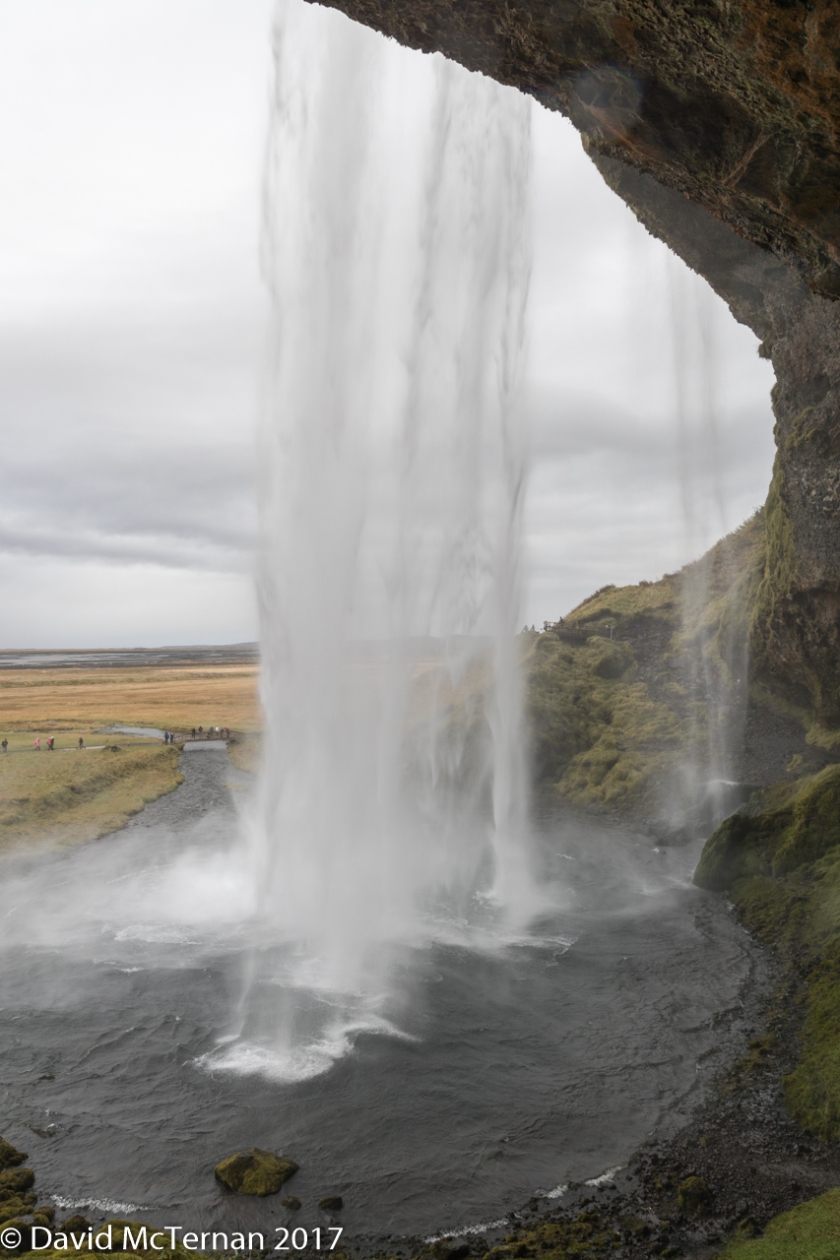 You can also walk along the left edge of the cliff to another, smaller fall where you can either climb to the top or walk round through an arch to the left that takes you to the base. This involved walking in the river and we did not have wellies which would have been necessary. 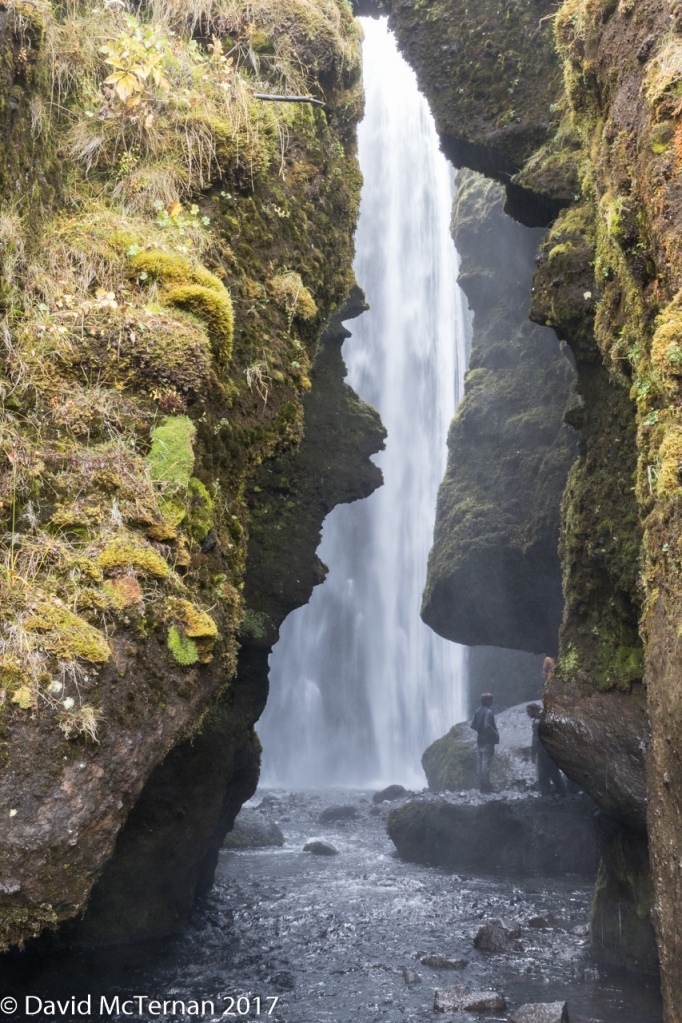 Then on to Skogafoss, about another hour’s drive. We didn’t bother walking to the top but instead went as close as was sensible to the spray at the base. Like a summer’s day in Ireland. There were some unappealing tourist cafeterias but our top tip is the little red spotty chip van near the top of the access road which served us some of the best fish and chips we had ever tasted. We ate these sitting on stacked pallets in the sunshine with a view of the waterfall. 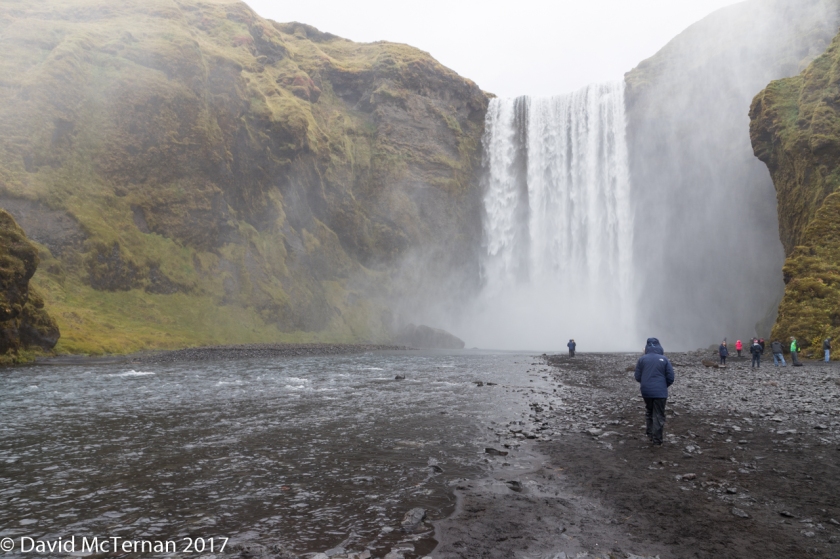 Next up was Reynisfjara beach which regularly claims the lives of tourists who get too close to the waves. The deaths are caused by so-called “sneaker” waves. It is a fantastic, primitive place, with hexagonal basalt patterns everywhere. We walked along to the end but then sensed the tide was coming in and went back to the car. 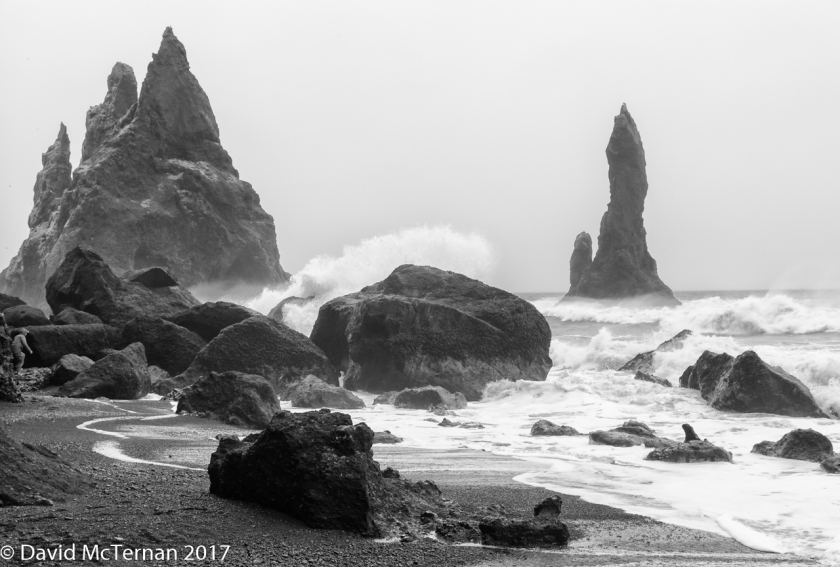 The base for two nights was Glacier View Guesthouse. We seemed to cross miles of flat plains dotted with smooth mounds of rock and ash. We learnt that these were caused by a massive eruption in 1918 which spewed water and ash in a broad sweep. It is in an isolated but atmospheric spot although is annoyingly often cloudy and wet due to the nearby glacier. Really good food, room and overall hospitality.

100% cloud cover so no northern lights last night. A very grey and wet start after a hearty breakfast. The road was just visible and the landscape indiscernible. We had very little idea of what we were travelling through. We saw round moss covered rocks at the side of the road, then curvaceous hillocks, then more flat plains.

We’d booked the Glacier Lagoon Zodiac tour at Fjallsárlón and arrived in a little under 2hrs. The staff were friendly and kitted us up in bulky survival jackets and life vests. Not that they have lost anyone yet. The tour took us close to a number of icebergs which are intense blue when freshly calved and fading to white as the ice density changes through melting. Some were riddled with trace lines of compressed air. Recommended if you want a close look though you can also walk to the edge of the glacier if you want. It’s receding at 100m a year due to a changing climate.

We drove further towards the Diamond Ice beach stopping when we spotted the peak of an iceberg from the car. We stopped and hiked along the shore of Jukulsarlon lagoon which was packed full of icebergs of various hues of blue, white, black and green. The sky started to clear and the sun came through.

Diamond ice beach is an amazing sight. Chunks of icebergs of various sizes litter the beach. We spent at least an hour taking pictures and walking to where the ice petered our giving way to black sand and crashing waves. 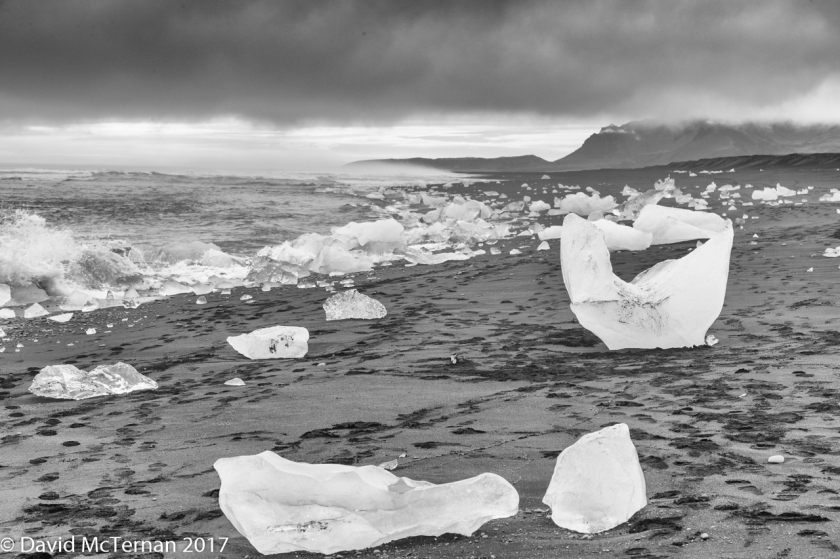 The drive home was more interesting as we could see all the mountain ridges, waterfalls and glaciers we’d missed on the way out. The rain set in again as we approached the area of our guesthouse. Localised weather again.

In the footsteps of Justin Beiber

Not seen the video? Here it is. He covers pretty much what we did. Though we passed on the skateboarding and braving the ice lagoon in our underwear.

Off to the gorge, Fjaðrárgljúfur.  This is a 2km long and about 100m high. It zig-zags through the hill side. Unlike Justin B, tourists cannot just stand on the edge of the cliff tops.It was amusing watching the “guardian” chasing foreign tourists who had climbed over the ropes. She ran with her shovel, plaited pigtails flying behind her like a cross Pippi Longstocking. She had a hard time making people stick to the muddy path which she was trying to repair. One photographer just ignored her which is not justified.

We stopped to admire the unusual mossy stones in the sunlight rather than rain though this was a brief respite.  And rolling on them is also not allowed. 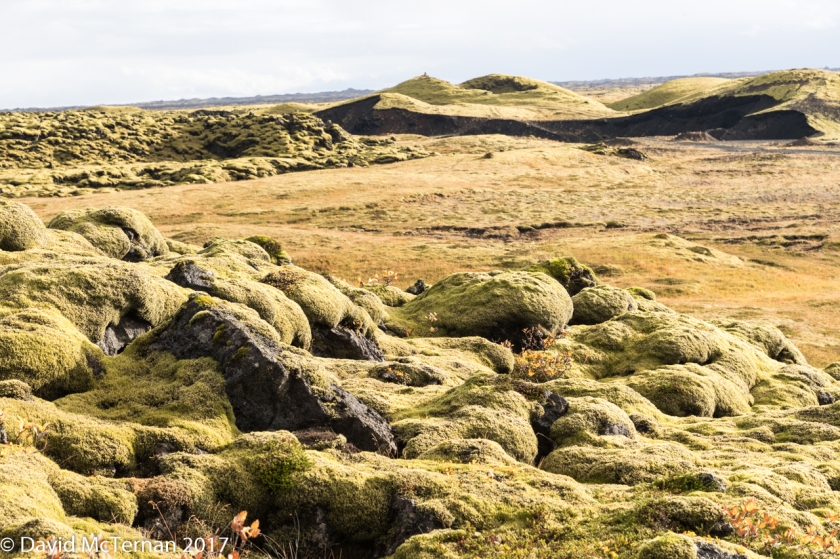 We saw some interesting rock formations at sea and stopped at Dyrholaey to admire the arch. There was an a causeway  leading to the parking area with stunning reflections of the mountains in the placid water. 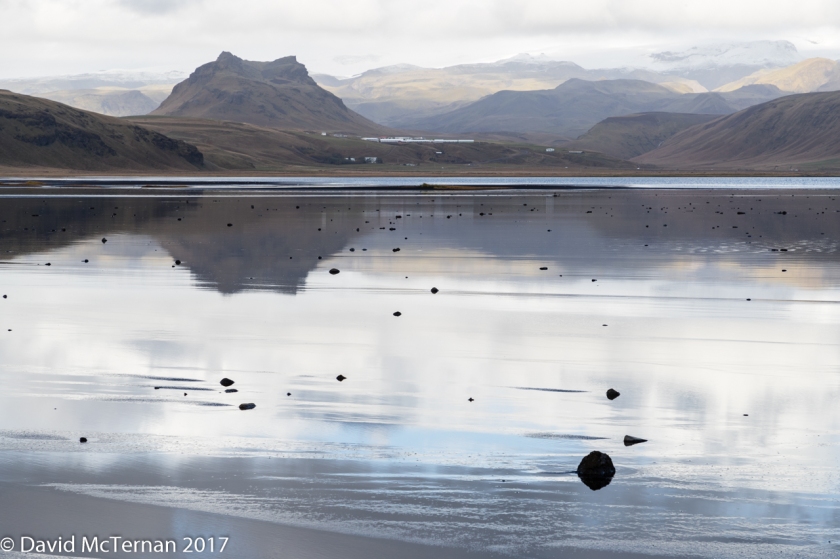 Next up was the Skogar Folk Museum which was a mix of historic buildings and entire history of telecommunication and transport in Iceland. An artificial but interesting insight into the hardships of life in Iceland during the 1700-1850s.

On the way back to our guesthouse we stopped at the Solheimajokull glacier for a short walk to the dirty tongue of ice. We’d been spoilt by the other glaciers which were much more formidable and impressive.

Next was the famous Solheimasandur Plane Wreck. A 4km walk across endless black lava beach each way. It was very busy but we stayed over an hour talking some interesting shots of the plane when we could find a time when no one was climbing, posing or playing inside. 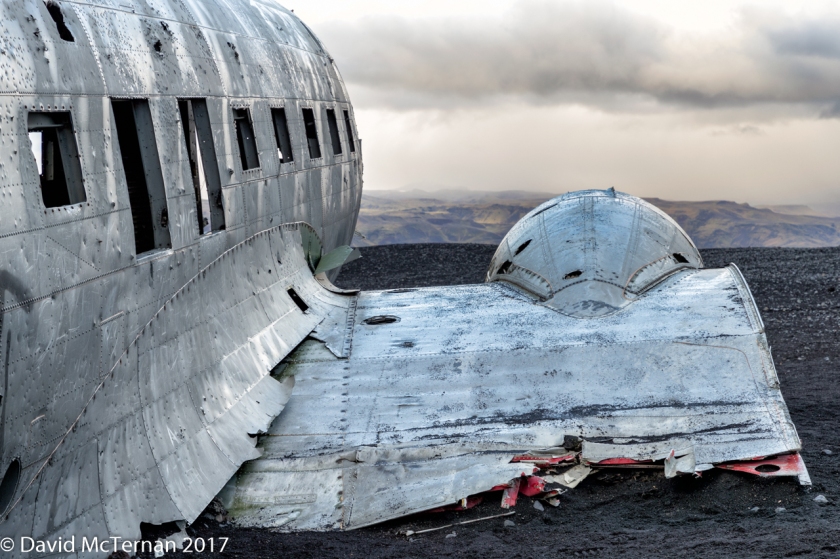 We didn’t like our stay at the nearby Solheimahjaleiga Guesthouse.

The City of the Smoky Bay

On the road early to Reykjavik.

We parked near the Sun Voyager sculpture and then walked up to the Harpa concert hall building followed by the lovely cathedral. 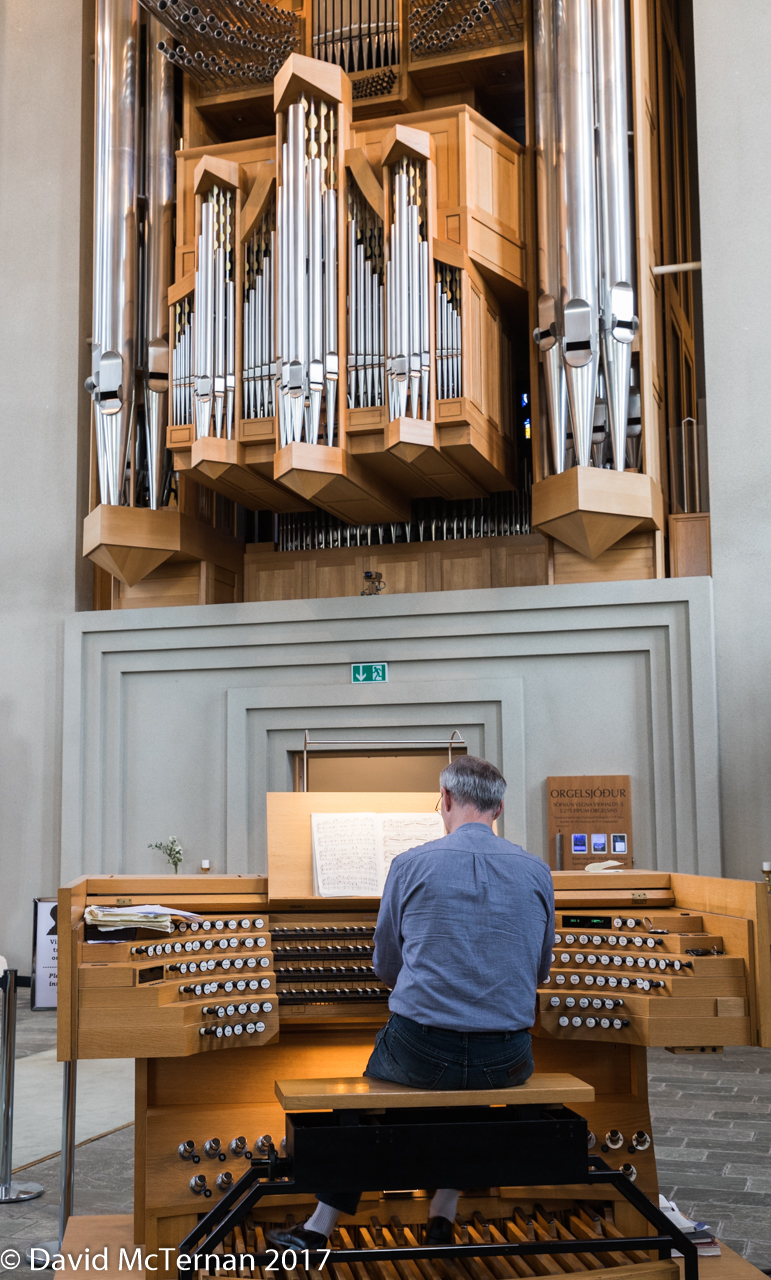 Colourful street art and many quirky shops and cafes. 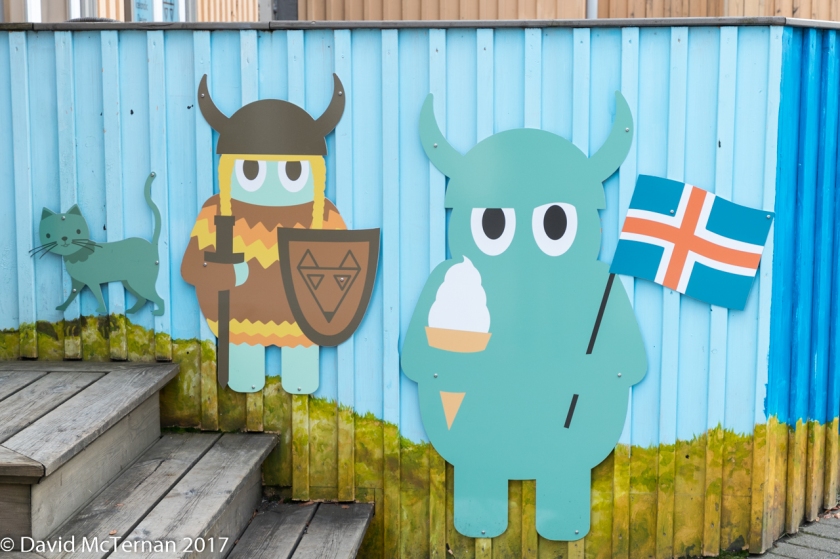 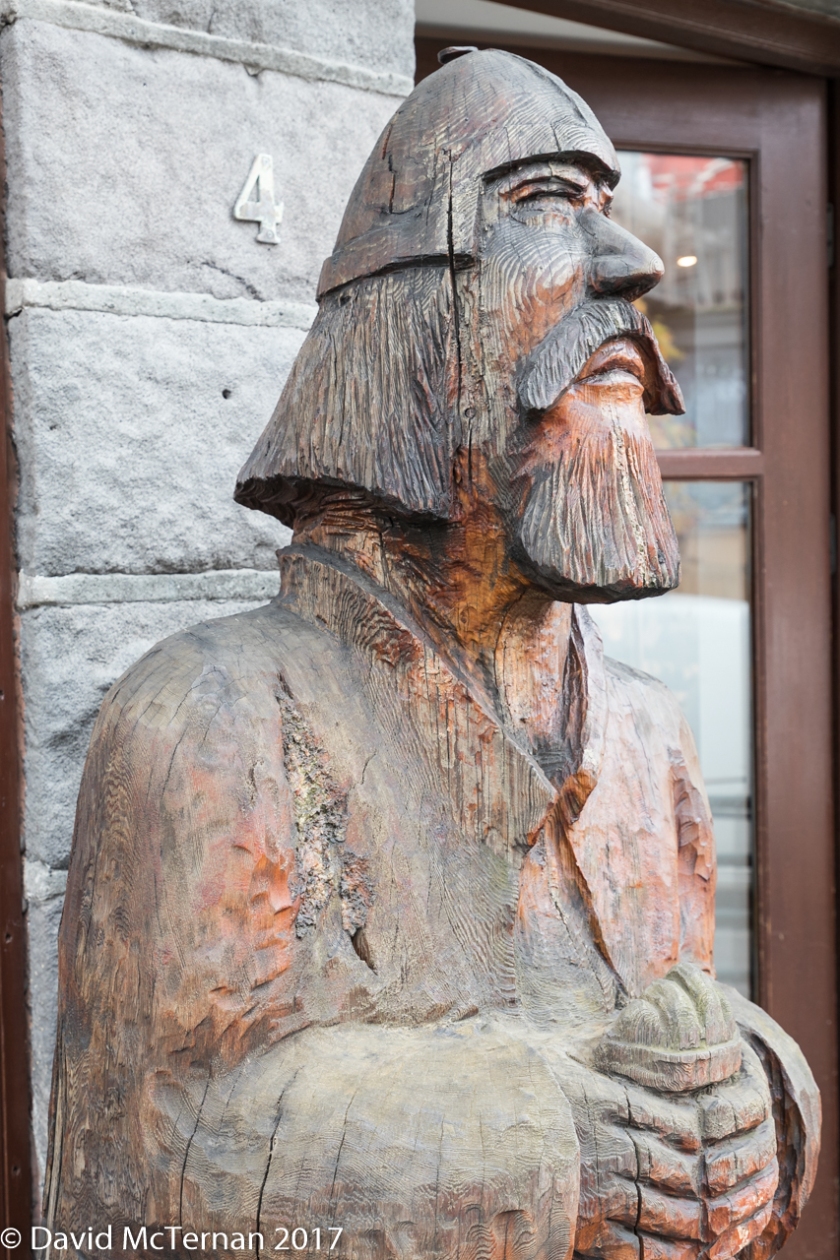 Lunch at Icelandic Fish and Chips (the most expensive fish and chips I’ve ever eaten) which was tasty.

The Blue Lagoon and a wallow in the hot thermal waters. These are the silica-filled waste water from a geothermal power plant just a 1km away. Very well done and the face pack and drink were refreshing after a couple of hours in the 38C water. 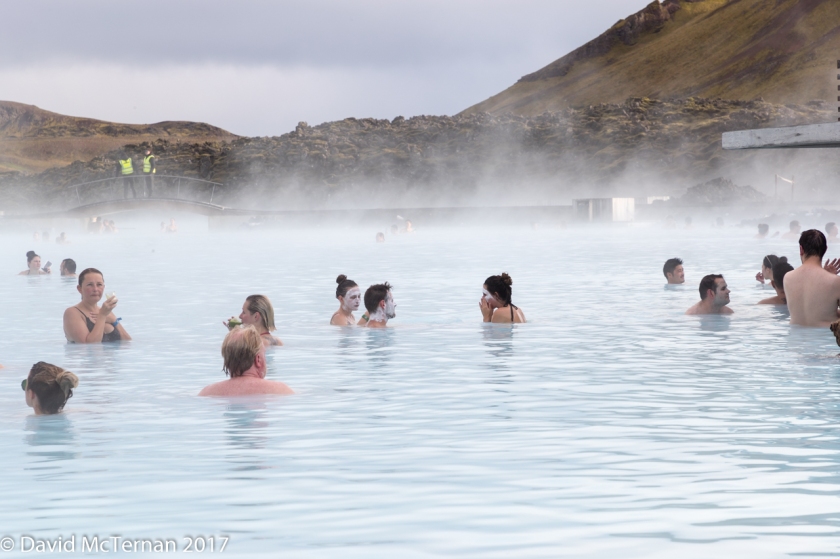 Dinner was at Rok, a trendy small plates place before a classic Icelandic liquorice icecream in a cafe. Icelanders love ice cream in all weather and even have a word for driving along with an icecream.

We stayed overnight in Fosshotel Baron where we had a huge room. 5am start for the airport and we had a little trouble finding a petrol station open to fill up the hire car before returning it. Actually, we tried 7 garages and all had run out of diesel. A total of 1500km over the 5 days. Iceland is big.